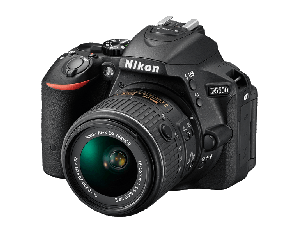 The company sent us the D5500 18-140 VR kit, which includes a Nikon 18-140mm zoom lens. The camera body is compact with a curved grip for comfortable holding. It also has a high-definition touchscreen LCD that opens out from the back of the camera.

We gave the camera to our videographer, E’lisha Holmes, to test for about a month. Here is her breakdown of the D5500.

Holmes says that what struck her most when using the D5500, was how well it worked in low-light situations, and that the in-camera audio works “pretty well.â€

She raved about the zoom lens. “The lens is great because, instead of having to buy a wide and a telephoto lens, you cover all the basics all in one lens.â€ She also mentioned the convenience of the built-in WiFi–perfect for transferring images to a smartphone for the photographer on the go.

The D5500 has a VR setting–this is for “vibration reduction.” The feature allows for shooting at shutter speeds four steps faster, reducing image blur. Holmes liked the VR capability. “The VR setting is pretty nice. It gives you a couple of extra F-stops, which can definitely come in handy.â€

However, Holmes thinks that, overall, the camera stabilization could be better. “I like that you can change some of the camera settings–such as the ISO, aperture, and/or shutter speed–on the touchscreen view display,â€ she says.

She did note a caveat to the LCD. “The touchscreen capabilities on the view display are pretty cool. But, it gets annoying how, when the camera is hanging around your neck, it can bump against your [body] and just randomly take photos.” However, Holmes also says, “It’s great there’s an option to turn off the touchscreen setting.â€