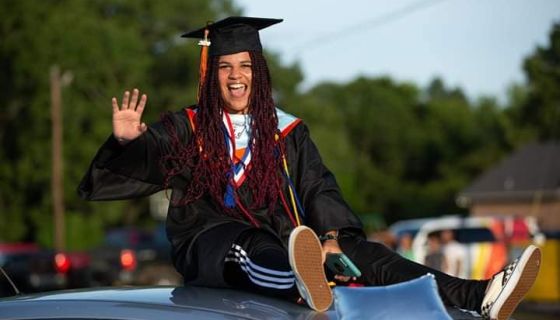 An East Texas teen may not be able to attend her graduation after her principal requested she remove her braids because they were too distracting.

According to Essence, Kienjanae Hooper spent eight weeks saving the money she earned from working at a local car wash to get long, flowy, burgundy-tinted braids for her senior photo shoot and graduation ceremony. The hairstyle took 10 hours to complete, but Hooper was ecstatic with the result. That is until Monday, when the principal at Gladewater High School, Cathy Bedair called Hooper’s mom to tell her the hairstyle violated the school dress code.

Bedair told Hooper’s mom her daughter would “have to take [them] down in order to walk and graduate” at the in-person ceremony scheduled for Friday evening.

“I said no ma’am; there is no reason that she should have to hide or take her hair down when she’s worn her hair [in braids] throughout the school year,” Kieana Hooper, who is white, told Essence. “I told her, she’s not doing nothing outlandish, like blue, green, purple or pink [hair]; she just likes to wear highlights and low-lights, with a reddish tint, you know nothing out of the ordinary.”

Hooper told Essence she’s unsure if the request is based on race, but feels she is being targeted.

“She’s saying my hair is a distraction. But from what?” asks the 18-year-old. “Really, the whole thing is really dumb to me, to be honest. Why does it matter about my hair that I can’t walk across the stage? I’m not going to say, ‘oh, she’s racist,’ but people have been calling her racist. Even before this whole hair thing, people were saying that [about her].”

Similar situations have occurred inside and outside the state.

Hooper’s mom told the principal she refuses to make her daughter, who maintains an A-average and volunteers with hospice patients and special-needs children, change her hair for the ceremony. Hooper added that Bedair called her again several hours later and said Hooper could walk if she tucked the braids into her gown. Hopper’s mom rejected the compromise as well.

The Gladewater Independent School District code posted online states  “hair shall be cleaned, trimmed from eyes and well-groomed” and “hair coloring shall resemble a natural color.” The code contains nothing related to braids.

Gladewater Independent School District Superintendent Sedric Clark denies Bedair was targeting Hooper and said the issues was the color of the hair, not the style.

“Principal Bedair was simply attempting to address what she initially considered a violation of the GISD Student Dress Code that could keep Kienjanae from her well-earned opportunity to participate in the graduation ceremony with her classmates,” Clark told Essence.

Clark also confirmed that Hooper will be able to walk after Bedair decided that K.J.’s hair color is “close enough to a natural hair color.”

So far as we’re concerned, the child can walk with her classmates on Friday and we consider the matter resolved,” Clark said.

Attorney Waukeen McCoy, who represents the Hoopers, says neither he nor his client had been formally informed that Hooper would be allowed to walk without covering her hair.