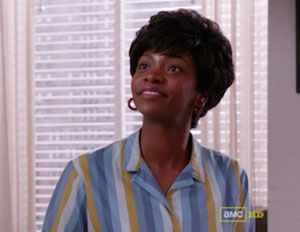 After a 17-month hiatus, Mad Men returned for it’s fifth season with a refreshing addition to the cast and plot, Teyonah Parris, who plays the show’s first black character, Dawn Chambers. Of course, as was prominent during the 1960s, Dawn is a secretary in the ad office in which the show is set, reflecting a realistic lack of diversity in the industry during the time.

The Los Angeles Times talked with Parris about how she got the role, why she thought it was a boss move and the question of being the “token black actor” on a critically acclaimed showÂ criticized for lack of diversity in actors and characters.

Los Angeles Times: A lot of people were concerned that Dawn was simply window dressing, like, ‘look, the token black character that will signal the changing times.’ And we sort of got to know a little bit more about her in last week’s episode, but it was mostly through the eyes of Peggy. What are your thoughts on that?

Parris: Um, I think Peggy is the perfect person for us to learn about Dawn. She’s the woman on the show who is more open-minded, feminist — she doesn’t even know she’s a feminist, but that kind of air about herself. I thought it was pretty cool to see her mind-set and her beliefs and these things that she stands for sort of tested and see how that plays out for Peggy — because, you know, we hear her talk about how her boyfriend is covering the riots in Chicago and all kinds of things. And then we have this heart-to-heart and at the end there’s the purse thing. The subconscious judgments that her character harbors and probably didn’t even realize it.

I realize a lot of responsibility comes with this role. it’s the first time the show has had an African American in the office, but I try not to let it overwhelm me.