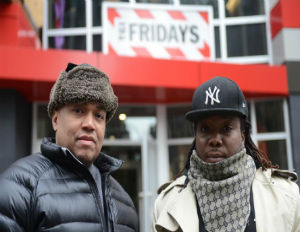 A TGI Fridays eatery in Manhattan is facing a lawsuit after ten black former employees claim they were fired and replaced with workers, mostly Hispanic, of a lighter skin complexion. The restaurant closed its Midtown location and opened about a block away. Only one of the black employees was rehired, as reported by New York Daily News.

Employees claim that when they challenged the staff restructure, a manager explained that he preferred Hispanic workers because they “work harder.” One of the plaintiffs Lisa Baker says her old manager told her that serving jobs weren’t available at the new location. “It was their opinion that black people were lazy,” she says. “We weren’t even given a chance.”

The suit reveals that management referred to the old location as “the ghetto store.” Plantiff Tony Pringle also touched on the subject, stating, “”They knew exactly what they were doing. They were basically not hiring blacks.â€ Now, the former wait staff have hired lawyers, and are seeking $500,000 for each employee, totaling $5 million for “loss of wages, emotional distress and punitive damages.â€ Lawyer Matthew Blit said, “The only reason these people are not working right now is because of their skin. “Heck, this isn’t the 1950’s.â€
What are your thoughts on this issue? Share them with us below.