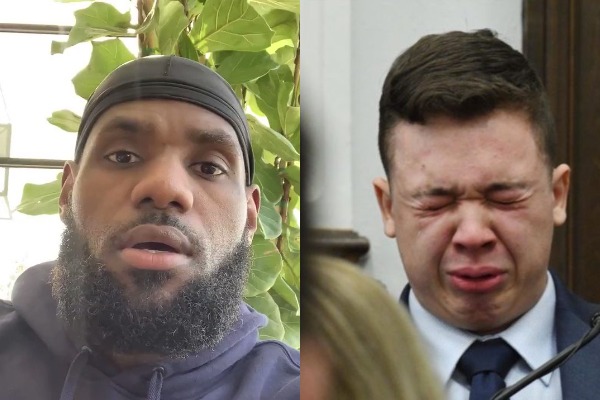 Many were surprised when the 18-year-old took to the stand on Wednesday to defend himself against charges of killing two people and wounding a third with an AR-style firearm during protests in Kenosha, Wisconsin, in August 2020, Cleveland 19 reports. Rittenhouse could barely get out a full word as he attempted to recall the events that led to him crossing state lines and taking the lives of social justice protesters.

Social media was up in arms over Rittenhouse’s testimony, with many reacting to his emotional testimony. Among the critics was none other than Los Angeles Lakers player LeBron James.

“What tears????? I didn’t see one. Man knock it off! That boy ate some lemon heads before walking into court,” James tweeted.

No stranger to criticism from the right-wing community, James quickly came under fire for speaking out against Rittenhouse. The teen has testified that he was only practicing self-defense when he approached Black Lives Matter protesters, and they allegedly tried to snatch his AR-15 before he opened fire, NY Post reports.

“Here’s a wealthy grown man making fun of a kid, as that kid recounted being attacked,” Ohio Senate candidate J.D. Vance tweeted in response to the professional athlete. “LeBron is one of the most vile public figures in our country. Total coward.”

Here’s a wealthy grown man making fun of a kid, as that kid recounted being attacked. Lebron is one of the most vile public figures in our country. Total coward. pic.twitter.com/hGjMIWbEPl

“LeBron James appears to be mocking people dealing with Post-Traumatic Stress Disorder (PTSD) in this post. Why?” Aaron Carpenter, a local councilor in Ohio asked. “Is this a joke to you? Not a good look!”

“When you revisit traumatic memories it comes out differently emotionally and/or psychically,” Harminder Singh tweeted. “Understand the subject before commenting on it.”

The conservative response to James’ comments reflects the mixed reactions to the Rittenhouse trial. While many liberals agree with LeBron and want to see Rittenhouse brought to justice after he was bailed out of prison by right-wing supporters, there are a large number of conservatives who want to see the teen walk away free despite murdering two people and injuring another.