The 10 Most Hilarious Twitter Reactions To LeBron James' Return 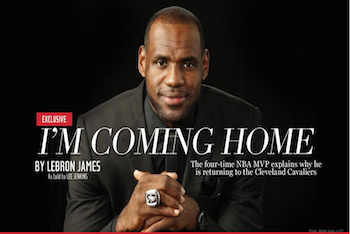 It is official. LeBron Raymone James is ready to come home to the Cleveland Cavaliers.

Breaking the news exclusively on Sports Illustrated’s website, the man most known around the NBA as the best player on the planet will re-sign with the organization that first drafted him in 2003. While the details of the deal are unknown at this point, the Internet (namely Twitter) has taken the news to a fevered level of insanity.

As the Akron-born, Ohio-raised phenom changes the NBA landscape for the second time in his career, Twitter had no problem letting loose the slander in the direction of the Miami Heat. We quickly scoured the web for the most hilarious memes out there for your enjoyment! Here, without further ado, are the 10 Twitter reactions to King James’ return to Ohio and the Cleveland Cavaliers.