The 15 #GoodellMustGo Tweets You Should See 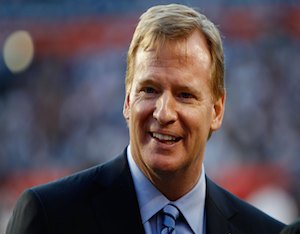 The NFL has had a supremely tough opening season as it has faced numerous issues rooted in violence. From Ray Rice recently released video featuring the Baltimore Ravens running back knocking his then-fianceÃ© out unconscious to Adrian Peterson coming under fire for abusing his child with a switch – all the problems have been heaped on Roger Goodell’s desk.

The eight-year commissioner of the National Football League earned a whopping $105 million in just five years of being the “most powerful man in sports”. His recent changing of the punishment for Ray Rice hasn’t quelled any simmering beefs the public has with not only his ignorance of serious matters but in how he handles them. So, when it was announced that CoverGirl’s easy, breezy, beautiful self were lending their marketing prowess to the NFL, Twitter was quick to throw a flag on the play.

The “official beauty partner of the NFL” was remade over through the help of Photoshop, as the ad features a woman in Baltimore Ravens colors with eyeshadow and a pretty heavy bruise under her left (our right) eye. The backlash at Commissioner Goodell’s behavior and his response to the scandal caused the social media powers that be to recreate the woman as a victim of domestic violence.

As the image began to trend, it was followed by the hashtag #GoodellMustGo, calling for the commissioner’s resignation from the NFL. He has yet to be fired from his position, nor has he stepped down, but the real question is will Twitter and the social media community have enough clout to punt Roger Goodell out for good?

Below are 15 of the most interesting and telling #GoodellMustGo tweets that you should see.