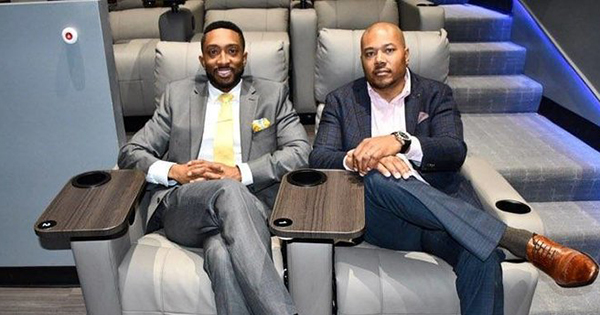 Next Act Cinema, a new black family-owned movie theater in Baltimore, Maryland, opened its doors to the public on March 7, 2019. Even better is that the majority of the feedback that the theater has gained has been positive shortly after its opening. The founders, brothers Anthony Fykes and Robert Wright, say they wanted to create, “independent boutique theater that offers a unique, personalized movie-going experience,” according to BlackBusiness.com.

The brothers have always considered having a theater to be a dream. They began by having a theater room in their own home before promoting it to all of Baltimore. Next Act Cinema changes the theater scene by promoting luxury within the theater experience. It’s the kind of a movie theater that contains over 86 leather chairs, huge screens, and incredible sound creating a beautiful experience for any movie fan.

In addition, the theater has a bar and restaurant that serves a variety of cuisine, including “soups, sandwiches, quesadillas, crab cakes, pizza, salmon, salads” and more, according to BlackBusiness.com. The Wright brothers also want to foster a community in Baltimore by recommending guests come to the theater 30 minutes or more prior to the start of the movie in order to enjoy a good meal with others.

According to BlackBusiness.com, in addition to their vast menu, is their “exclusive beer cheddar seasoned popcorn that doesn’t really have beer in it.” If guests do not end up eating at the bar and restaurant, they can order food from the comfort of their own seats if they watch movies after 12 at noon.

What differentiates Next Act Cinema from the rest is that it’s the first Black-owned movie theater in Baltimore. The theater has not only opened its door to a diverse group of people but also promotes films that truly represent them.