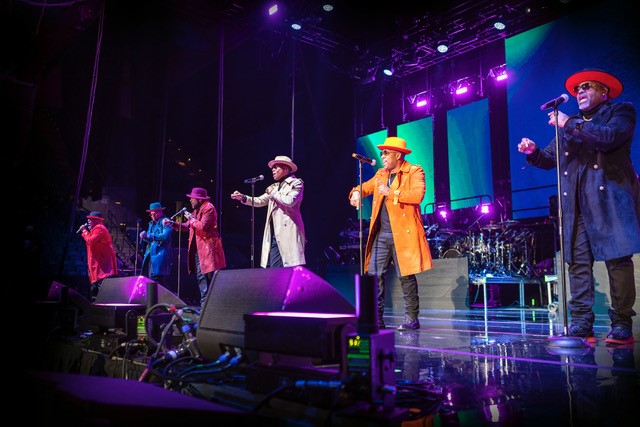 ATLANTA—The Culture Tour hit Atlanta for its fourth stop Sunday. The show, complete with a star-studded line-up, was part house-party, part old-school block party, and everything embedded into the fabric of Black culture.

With energetic performances from Jodeci, “uncle” Charlie Wilson, and New Edition, fans at the sold-out 21,000-seat State Farm Arena in Atlanta were taken back to their tween and teenage selves and treated to sweet songs from their days of old.

All six members of New Edition were on stage for the first time since 2014. The brothers from different mothers were decked out in brightly colored teal coats, black outfits, and fedoras while moving in sync to Brooke Payne-precision choreography. NE came out the gate digging in the crates to croon hits like, “Candy Girl” and the Bobby Brown-led Mr. “Telephone Man.”

New Edition’s set was a concert within a concert. Each member got the spotlight to sing their own independent hits.

There was Brown, the King of R&B, doing several solo numbers—“Tender Roni,” “Every Little Step”—with his fellow group members joining in and assisting with back-up dancing on Brown’s chart-topping, head-bopping 1988 hit, “My Prerogative.”

While it wasn’t the gyrating, bad-boy version of Bobby Brown that made him a household name, Brown gave a few hip thrusts to his screaming, adoring fans. Brown let us know that while he’s got some miles on him due to his multi-faceted life, he’s still got a little octane left in the tank.

Ralph Tresvant wowed the crowd singing the sultry song, “Sensitivity,” while Johnny Gill belted out with bravado his solo hit songs, “My, My, My,” and “Rub You the Right Way.” Gill joined the group in 1987.

Bell, Biv, DeVoe, otherwise known as BBD, brought the fire with their hits “Do Me,” and the hugely popular “Poison.”

New Edition alternated from singing various jams “Jealous Girl,” “Is This the End,” “Cool It Now,” “My Secret,” and “Count Me Out.”

Party Within A Party

With an eager audience waiting for the artists, the legendary DJ Kool tended to concert-goers by keeping the party hopping with jams that got fans up out of their seats and on their feet feeling the beats. Looking down from the elevated stadium seats, one could spy people hitting the electric slide, or pumping their shoulders while leaning and rocking out in the party-like atmosphere.

The Culture Tour, brought to you by The Black Promoters Collective, the preeminent coalition of African American independent promoters, did not disappoint.

First off, the concert, which was set to start at 7 p.m. kicked off on time at 7 p.m.! That alone was a win for the culture, which has wrangled with dispelling the myth that Black events typically start on CP time.

Jodeci Makes a Comeback For the Culture

Reunited and looking good, Jodeci hit the stage with all four members—DeVanté Swing, Mr. Dalvin, K-Ci, and JoJo—and gave the crowd all the gyrating and “ooh-yeahs” that defined their hit ’90s R&B sound.

From “Come and Talk to Me,” and “If You Believe In Love” Jodeci wooed crowd-goers down memory lane with their baby-making hits. They also flashed iconic TV moments on a large screen showing characters Martin and Gina from Martin to Dwyane Wayne and Whitley Gilbert from A Diff’rent World hugged up and loving one another as they belted out “Forever My Lady.”

For those who don’t get the reference, remember it’s a culture thing and this is The Culture Tour, ripe with moments that are akin to Black culture.

Jodeci also made mention of their noticeable absence from the music industry saying, “How y’all been?” asked K-Ci before noting the obvious, “The question is, where we been,” he joked.

Soon after Jodeci finished their set, the legendary Charlie Wilson hit the stage with the intention of not being outdone.

Wilson is one of the few names in music who resonates with multiple generations of music lovers, beginning as the co-founder/lead singer for The Gap Band (“Outstanding,” “Burn Rubber On Me,” “Yearning For Your Love”).

And his reign continued Sunday night as he dropped more than a bomb on stage and had the crowd roaring as he danced with lively ladies, even after a recent knee surgery.

Wilson gave what he was supposed to give and put on quite a show, lighting up the stage with fancy footwork, parading up and down the stage dancing, and wearing neon jackets and sneakers and a fedora during one song. He also donned a sequin jacket and looked like a smooth criminal in another song complemented with beautiful backup dancers by his side.

Wilson was playful and poetic: from starting the party with the jams “Party Train,” and “Early Morning” to reintroducing himself with a new classic “Charlie, Last Name Wilson.”

Uncle Charlie came to play–giving the crowd equal parts old-school in the basement red-light party and an all-out Sunday morning praise and worship session as he did a little shouting while paying homage to his 27 years of sobriety.

The Culture Tour is set to hit 30 cities and it is worth the wait and worth the time to grab a seat to see your favorite artists.

Salute to the Black Promoters Collective (BPC), a coalition of six of the nation’s top independent concert promotion and event production companies. As a 100% Black-owned business, its mission is to be the world’s leading producer and provider of culturally relevant live entertainment experiences.

Catch the Culture Tour in your city: