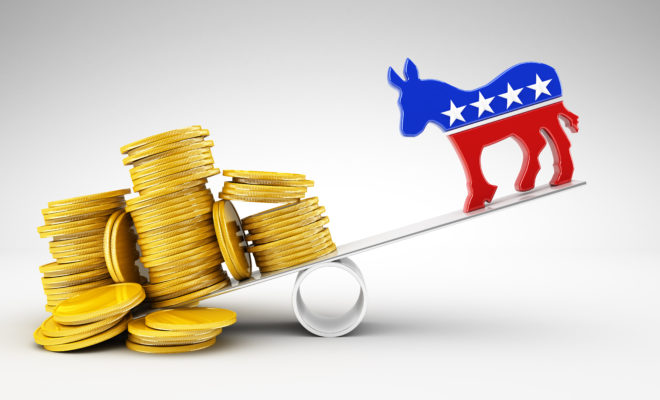 Data consistently demonstrates that blacks are the most loyal Democratic voting bloc. Surveys conducted in 2016 indicate that 87% of blacks identify with the Democratic Party, which constitutes roughly 21% of all Democrats. Comparatively, 63% of Hispanics and 39% of whites lean left.

And yet, despite loyalty to the Party and contrary to the 2016 Democratic Party platform, which emphasizes the Party’s commitment to eliminating systemic barriers to wealth accumulation, the DNC has consistently failed to implement a successful strategy to equalize access to big dollar contracts.

In fact, the Democratic National Committee (DNC) spent $759 million on contracts during the 2010 midterm election cycle. A mere 1.5% of contracts were allocated to African American contractors. Members of the DNC’s Black Caucus responded to contracting disparities with a forceful message; don’t bite the hand that feeds you.

The DNC defused frustrations by hiring Greg Hinton, a former US Cellular executive, as the DNC’s first-ever chief diversity officer in 2011. His role was to oversee diversity staffing and procurement efforts at the three major Democratic political committees, including the DNC, the Democratic Congressional Campaign Committee (DCCC) and the Democratic National Convention Committee (DNCC).

Rep. Debbie Wasserman Schultz (D-Fla.), the former DNC chairwoman, said in a statement that the “Democratic Party has long been dedicated to including talented people who reflect the diversity of our great country, and Greg will bring his talents to bear as we make sure we are living up to the commitment.” She added, “I’m proud we’re taking this critical step forward and look forward to working closely with Greg as we strive to take our values of inclusion and strength through diversity to the next level.”

This step in the right direction alone has not yielded desired outcomes. In 2014, for example, a report revealed that only 1.7% of the $500 million the DNC spent on consulting went to businesses that are minority-owned or have a minority principal.

“I think the lack of diversity in the contracting is quite clear. They can do better. Historically, the black caucus has been [taking] point on trying to highlight that issue,” said Mississippi Democratic Rep. Bennie Thompson, a Congressional Black Caucus (CBC) member. “Minorities, both black and brown, are the most loyal people to the party, and I think a recognition of that loyalty can come through the contracting.”

On face value, the number of contracts allotted to minority contractors increased significantly during FY 2015. Twenty-three percent of all contracts were allocated to minority owned businesses.

And yet, members of the minority caucuses have expressed concern regarding the new “one person” formula used by the DNC to classify a business as “minority-owned.” The one person formula allows companies with a single minority owner (i.e., persons of color, women, veterans, or members of the LGBT community) to be recognized as a minority vendor. This new formula replaces previous criteria which reserved minority contracts for companies with majority ownership by persons from historically disadvantaged racial groups.

All Talk, No Action?

The failure of the Democratic Party to seriously address the issue of contracting disparities speaks to a larger issue facing the left; namely, its inability to reduce the racial wealth gap. More than 50 years after the civil rights movement, blacks have become poorer, not richer. According to a report published by the Institute for Policy Studies, white households are, on average, seven times as wealthy as African American households. The report estimates that it would take black Americans 228 years to acquire as much wealth as white Americans have today.

Although the Democratic Party acknowledges that these disparities exist, its policies and practices, as demonstrated by its unwillingness to pay anything more than lip service to contracting disparities, fail to tackle them in a meaningful way.