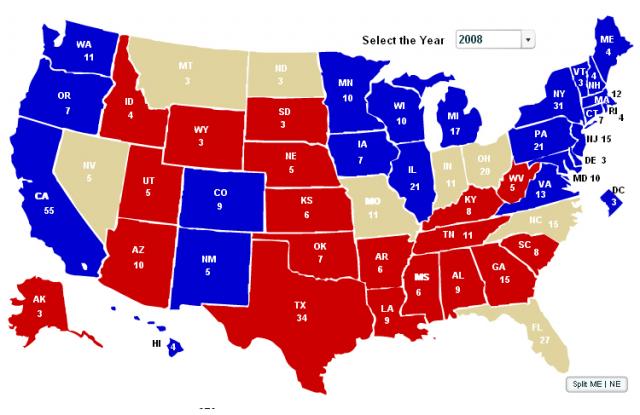 CHICAGO — Like a snowball rolling down a hill, Sen. John McCain thinks that in these final days he can gain enough momentum to absorb the most critical swing states to obtain the 270 electoral votes he needs to win the presidency. Pundits and pollsters say a McCain win isn’t impossible, but unlikely. Although Sen. Barack Obama’s lead has shrunk in some toss-up states, including Pennsylvania, several national polls show that Obama has had a consistent lead; ranging from a 2.1 lead reported by Investor’s Business Daily to a 13 point lead, according to the CBS/New York Times poll.

Nevertheless, Obama continues to campaign like this lead doesn’t exist. Although his speeches haven’t changed much over the last week, he continues to hammer the point that a McCain presidency will bring as much change to the country as a third term for President George W. Bush.

“After decades of broken politics in Washington, eight years of failed policies from George Bush, and twenty-one months of a campaign that has taken us from the rocky coast of Maine to the sunshine of California, we are one day away from change in America,â€ said Obama at a rally in Jacksonville, Florida this morning.

McCain on the other hand is dealing with dissension from within his campaign that he cannot afford. On the CBS Early Show today, Mitt Romney, former Massachusetts governor and top McCain surrogate, said he thinks that having government pay for healthcare is the wrong direction for the country, but he doesn’t think that Obama was a socialist. That sentiment flies in the face of what McCain and vice presidential candidate, Alaskan Governor Sarah Palin have been telling voters over the last week.

A preview of Obama’s interview with Katie Couric also appeared on the Early Show this morning. In excerpts of the interview Couric asks Obama about an aunt of his who is seeking asylum in the U.S., but who might be deported to Kenya because she violated immigration laws. Obama also comments about his anger in regards to how the GOP has treated his wife, Michelle Obama. More of the interview will be broadcast tonight on a special Monday edition of the CBS Evening News.

The candidates and vice presidential candidates will be in no fewer than 14 states over the next 48 hours, reports MSNBC. Their “get out the voteâ€ efforts are widespread because both candidates are making a play for the states that were won by the opposite party in 2004.

McCain is hanging tough and launching an election-eve sprint across seven states today, which will include several southern states. “America is worth fighting for. Nothing is inevitable. We never give up. We never quit,â€ said a defiant McCain in Tampa, Florida this morning.

Today, both candidates spent a significant amount of time in Florida, a state that twice ushered President George W. Bush into the White House. Other Southern states are getting a lot of attention