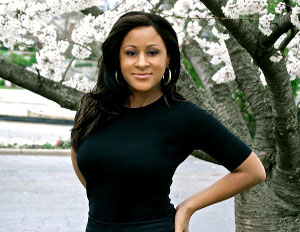 The fourth installment of CNN’s Black in America: The New Promised Land — Silicon Valley placed NewMe co-founder Angela Benton on a platform for both national and international audiences to see. Â However, among black digerati, the 30-year-old has been a well-known mainstay since the 2000s.

As founder and publisher of Black Web Media, Benton launched BlackWeb20.com, the leading online publication for African-Americans craving the latest in technology and new media news.Â  The BLACK ENTERPRISE August 2011 cover subject took her experience and paired up with blogger and social media expert Wayne Sutton to bring forth last summer’s NewMe Accelerator, the first minority led tech incubator in Silicon Valley. The program helped Benton and seven other techies execute their pitches and flush out business ideas before presenting to venture capitalists.

The serial entrepreneur has been recognized as one of the Most Influential Women in Technology by Fast Company. Benton is the youngest inductee to enter the Minority Media and Telecommunications Council (MMTC) at just 29 years old. In 2010, she became a Woman of Power honoree by the National Urban League. The Northern Virginia native has also been recognized on various lists, including The Root 100, The Grio 100, and Ebony’s Power 150 in both 2011 and 2012.

BlackEnterprise.com spoke to Benton about her success in tech, who she’s inspired by and why her vision for the future of Silicon Valley includes more “swag.â€

As a young, African-American mother and entrepreneur in the predominantly white, male tech space, you’ve been able to make a substantial mark. To what do you attribute your success?

I don’t think too much about being a young mother here, or being black and female. But I do know that it’s what makes me, ‘me.’ I had a meeting with a multi-billionaire. It would be so easy to psych myself out and say: ‘He’s probably never met anyone like me. I’m probably the only black woman he’s met.’ But I went in with confidence, and we were able to connect on a level that had nothing to do with race. You have to be yourself and realize everything you bring to the table is either an asset or a hindrance.

How does it feel to know you’re defining history?

Anytime someone tells me that I’m making history in what I’m doing, I just feel so blessed. People work their whole lives to get the opportunities and the appreciation that I’ve been given. It’s really humbling.

Name an African-American female leader that inspires you.

Oprah. I can only hope to be a fraction as successful as she is. I respect how she makes all avenues of her business work for her in a very synergistic way.

If you could give advice to your younger self, what would it be?

CNN’s coverage of the NewMe Accelerator brought attention to the challenges facing blacks in technology, in particular, focusing on the plight of eight tech entrepreneurs. We saw the impact the incubator had on their lives; what can we expect to see from NewMe now?

We launched NewMe Community, so now we’re able to service and help a wider amount of people than we were able to do in the [NewMe] Accelerator program.

Where do you see Silicon Valley in the next 10 years?

One of things I love about the accelerator is our ability to bring people to [San Francisco] from all over the world. That means we’re making a direct impact on what Silicon Valley looks like. In ten years, I see Silicon Valley looking more diverse. Honestly, Silicon Valley, it’s going to be a lot cooler because us black folks bring our own swag.