The GOAT! Allyson Felix Called Out Of Retirement To Lead US Team Into Finals At World Athletics Championships 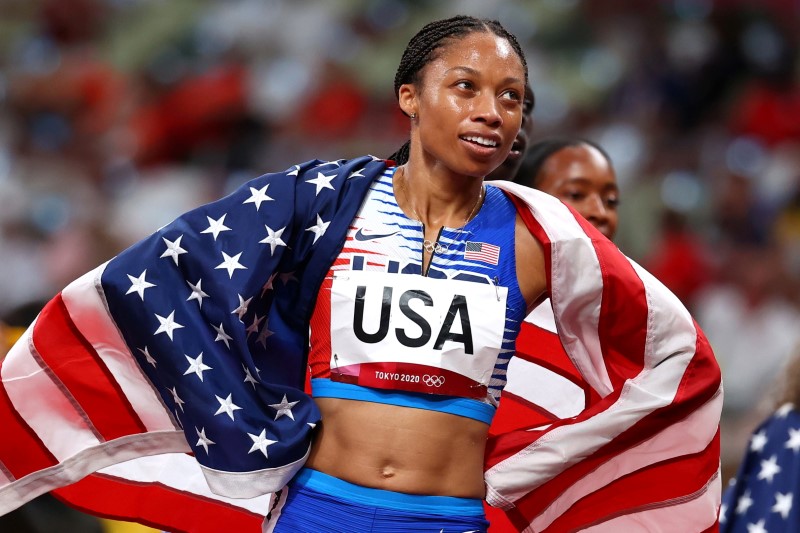 Called out of retirement, Allyson Felix understood the heat!

Oregon Live reports that the seven-time Olympian led the U.S. team in the 4×400-meter relay at the World Athletics Championships on Saturday, July 23, 2022, in Eugene, Oregon. The team of Felix, Talitha Diggs, Kaylin Whitney and Jaide Stepter Baynes conquered the first heat and led all qualifiers, with an impressive time of 3 minutes, 23.38 seconds.

Felix, who was enjoying her very brief retirement, ran in the second leg and finished her lap with a full speed time of 50.61.

The World Athletics Championship goat was eating hot wings and savoring a root beer float in Los Angeles when she got the call. She was needed back in Oregon, after she helped the 4×400 mixed relay team to a bronze medal last Friday, which was thought to be the last track race of her career.

“I was asked to run in the prelim,” Felix said, per The Associated Press. “It was just about being a team player and putting them in position to run their best (Sunday),” Felix said.

“I was well on my way (to retirement),” Felix continued. “I had no plans to be back here for the rest of the meet. But things happen. I felt good. It was really cool to run when the stadium was full and just get all the love, and run with this amazing group of women. It’s really set the team up to go after the title.”

“It’s kind of coming full circle, literally,” Whitney said of passing the baton to Felix, according to the outlet. “To be able to run alongside her, as well as these other great ladies, is always a privilege. I can’t be happier.”

By running in this preliminary race, Felix increased her World Championships medal collection to a record 20 medals — 14 gold, three silver and three bronze, according to the World Athletics.

“My best memories of this week are seeing my daughter cheer for me, seeing young women support me and having them thank me for standing up for them, and walking through the stadium and seeing women wearing Saysh,” Felix said, per The Associated Press.

The finals on Sunday were a sweeping success. While Felix watched the race from the stands, Sydney McLaughlin ran a remarkable 47.91 anchor leg to deliver the women’s 4×400 gold medal to the U.S., the World Athletics reported. Her split was reportedly the fastest since Felix ran 47.72 in 2015.