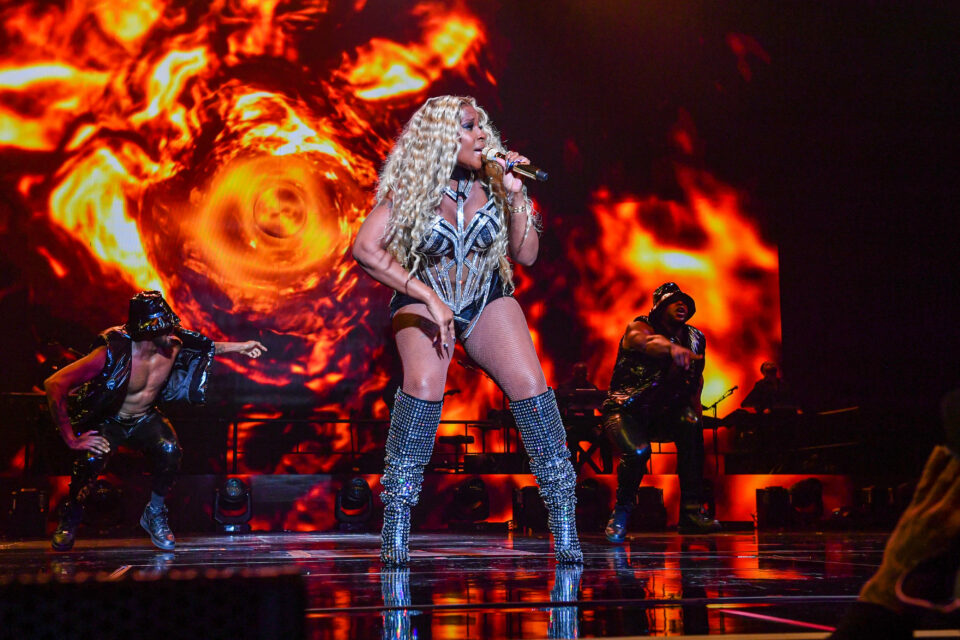 The show commenced with special guest performances from R&B’s most talented and upcoming stars, Queen Naija and Ella Mai.

Queen Naija took the stage first, performing some of her featured songs, including “Lie To Me,” featuring rapper Lil Durk, from her album “Missunderstood.”

Following Queen Naija’s performance, Grammy Award-winning artist Ella Mai sang “DFMU,” “Power of a Woman,” and “Trippin.” The rhythm of the guitar coupled with the white lights and purple silhouettes created a nostalgic feeling, setting the scene for the grand entrance of the night.

The drums erupted in sound and the stage went black, signaling intermission. The audience burst into song as the DJ played the 90’s biggest hits: l“Before You Walk Out of My Life” by Monica, “I Wanna Be Down” by Brandy, and “Can We Talk” by Tevin Campbell.

Suddenly, the lights dimmed. Then, a video popped up on the wide view screen with clips of Mary J. Blige walking and talking. Startled by the video, the stadium began to echo with chants of the icon’s name while the suspense grew.

As the crowd’s anticipation settled, the stage lit up with flames and the background beamed with orange and yellow lights as the queen rose from the smoke singing “Amazing,” featuring DJ Khaled, and “OnTop,” featuring drill artist Fivio Foreign, from her album, Good Morning Gorgeous. Led in by a precession of dancers in black sequin dresses Blige wore a glistening black Balenciaga jumpsuit with waist-length blonde ponytails.

At one point, Blige motioned to the crowd and the lights faded into a blue ocean-like abyss with static motioned white lights taking over the set as she sang “You Remind Me.” Blinded by the white and yellow lights she paused and pointed her gold-covered microphone to the crowd. As the piano carried the melody, the audience sang “Real Love” and “I Can Love You,” featuring Lil Kim, while the artist showed off her dance moves.

Next, the bass guitar faded into a low harmonic sound and Blige began to sing “Rent Money” featuring Dave East. At the same time, male background dancers came on stage and tore off their shirts as they surrounded the singer and waved to the crowd together. All you could see were hands in the sky as she performed “You Bring Me Joy” and “Be Happy.”

People smiled, screamed, and dances as the queen exited the stage for the next part of the set.

Instantly, she opened back up with black rods descending from the ceiling with a heart-shaped graphic harrowed in diamonds and red, blinking lights. She ascended from the smoke, this time in a gold and white chariot singing “Good Morning Gorgeous.”

Seducing her supporters with her mesmerizing gaze, she sang the beginning of “Not Gon’ Cry” and “I’m Goin’ Down,” which received a standing ovation from the crowd.

At the end of each set, fans were taken through a series of scenes from a collection of videos taken over the singer’s life on the road accompanied by a monologue of her personal struggles through the years. Each video paid homage to the singer’s personal journey of seeking forgiveness and peace and celebrating her finding her voice again.

In another scene, Blige emerged from a tropical oasis to perform “Everything.” Fans were overtaken by an intergalactic view that illuminated the stage with pictures of the star in a time capsule while she sang “My Life.” Abruptly, the drape dropped, and flames and smoke overran the stage. Enamored by every word, she paused again and jumped up with the crowd singing “Family Affair.”

The legendary performer ended with an electrical performance to “Just Fine.”

And that, she is!

The show was an emotional performance and a must-see at a stadium near you.

Upcoming dates for the “Good Morning Gorgeous” tour presented by Hologic can be found online.