The GOP Has a Problem With â€¦ Empty Podiums 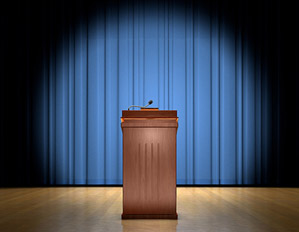 On Sunday night, representatives for the Republican presidential candidates convened in Washington, D.C. to discuss their grievances with the most recent CNBC-hosted debate. The result of that meeting was a letter drafted by well-known GOP lawyer Ben Ginsberg. In the letter, the candidates who participated in the meeting outlined their various questions and demands. Among those demands were requests to ban the following practices from all future debates:

The letter also demanded that moderators refrain from asking candidates yes/no questions without providing enough time to answer, although the letter did not specify if the candidates had come to a consensus on what would be considered adequate time for a two-hour debate with 11 participants.

However, these negotiations have already begun to fall apart after swift condemnation from both political parties, including some of the GOP candidates themselves.

Donald Trump’s campaign announced that it would negotiate with the networks on their own, cutting out both the RNC as well as his fellow candidates. John Kasich, Carly Fiorina and Chris Christie also announced they would not be signing the letter.

Christie seemed to take particular issue with the candidates’ demand that networks pledge not to show empty podiums after commercial breaks without first providing the audience with specific information regarding the distance of the bathrooms from the stage. In an interview with “Fox and Friends,â€ he blasted the candidates behind the letter. “Why are we wasting time whining and bickering over this?” he asked. “I’d rather spend my time going out there talking to voters about issues that really matter to the country. And if you think that anybody watching those debates who really, really cares about the future of the country is worried about whether a bathroom is close? Come on.â€

The candidates expressed concern that seeing their podium empty would register negatively with viewers and would prevent the candidates from comfortably making the apparent long-distance trip to the bathroom.

“If you can’t exert bladder control for two hours,â€ Christie continued “Maybe you shouldn’t be president of the United States.”