The Great Recession No Match For Producers of 'The Great MacDaddy' 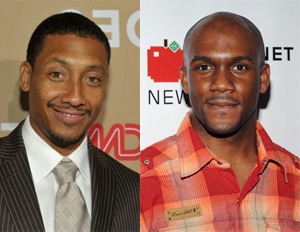 Actors Khalil Kane and J Kyle Manzay will star in 'The Great MacDaddy' in New York this fall.

One day earlier this year, the actor Khalil Kain walked into the Public Theater in New York City where Ron Cephas Jones was portraying the title character in Richard III. The play had toured New York City as part of the Public Theater’s Mobile Shakespeare Unit and included a performance at Rikers Island, the subject of a lengthy feature in the New York Times.

Though the performance had been received well, for all of its elasticity at 90 minutes, many theater critics and Shakespeare purists lamented its abbreviation, accessibility be damned. Not Kain.

“Outside the film community and agents in Hollywood, they don’t know who this cat is,â€ Kain said of Jones. “He just killed it. His physicality was lovely. He was evil incarnate. It was hot. And I’m thinking, ‘Damn, I wish I was in this. I’m jealous!â€

With the economic climate being what it is, resources for the performing arts have dried up everywhere. A new production of The Great MacDaddy, written by Paul Carter Harrison has overcome those odds. Thanks in part to a $40,000 grant from the National Endowment for the Arts, a $10,000 angel investor, an efficiently run Indiegogo campaign and a host of private donors, previews of the performance begin Saturday, November 10 at the 777 Theater in Manhattan.

The odds against staging the play seemed fair before director Alfred Preisser resigned as artistic director from the Classic Theatre of Harlem in 2009, even as the recession took its toll on theatre companies all over New York City.

“It’s extremely difficult to finance a play with more than six people that has a literary and theatrical ambition,â€ Alfred Preisser, who will direct The Great MacDaddy, said. “Those are not the plays that are easy to finance. There was a day when you could have $250,000 and capitalize everything through little old ladies who lived on the Upper East Side, but that’s not the way the world is now.â€

The principals involved in staging The Great MacDaddy all seem keenly aware of the rarity of the opportunity. Preisser and producer Diane Batson Smith remained passionate about the project through uncertainty – and were eventually awarded with the NEA grant – given to the Manhattan-based Negro Ensemble Company.

The role of Scag is largely metaphorical, an amalgamation of vices and devilish spirits meant to throw the title character played by Manzay off the path of self-discovery. Kain saw Richard III just weeks after meeting playwright Paul Carter Harrison for the role of Scag. Recalling his attraction to Jones’ sinister Richard III, he says he immediately knew he was in a be-careful-what-you-ask-for situation.

“But that’s part of why I came to New York, too,â€ Kain said. “I came here to do what’s really tight … what’s really hard and hard-hitting and good.â€

Manzay, who once played opposite Wendell Pierce in a street performance of Waiting for Godot in New Orleans to as many as 5,000 spectators per day, says that his work has always sought to try to avoid the unsteady current of economic circumstances in show business.

“The world that I’m in I didn’t see a big change,â€ when it came to the recession, said Manzay, whose company, Korner Theatricals, serves as lead producer. “Just to be able to produce the play and bring back this great classic is an honor. I’ve never done a play where the performance didn’t have some degree of spectacle for the audience and myself. It’s also something that’s socially relevant and artistically challenging.â€

Both he and Kain are excited about the artistic possibilities the open stage at 777 offers.

“It’s something I’ve never done before,â€ Kain said. “We’re putting this together on our own. It’s not about money. It’s about how I can grow and learn from the experience … I’ll get to say I worked with Paul Carter Harrison.â€

Harrison relied on the oral storytelling tradition to support the allegory of The Great MacDaddy, which takes an episodic 100-year journey across 20th century America. The original cast of The Great MacDaddy included Phylicia Rashad, Cleavon Little, Hattie Winston and the late Al Freeman, Jr. It was last staged at the Theatre De Lys, now the Lucille Lortel Theatre in 1977.

“It relies heavily on the great African American storytelling tradition. It has this big epic sweep, it’s very funny and you don’t see a lot of plays by African-American authors like that,â€ Pressier said, adding that most revivals tend to be realistic plays and dramas. “That tradition that sprang up, people who were living through those times weren’t allowed to have their own theatres. Stories that people told each other reflected the way they really felt about being enslaved people. I don’t think there’s another play like that.

The show opens officially on November 15. Tickets are available via Telecharge, and go on sale Tuesday, October 2.