The High Cost of Riots: Part 2 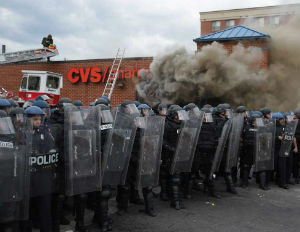 This three-part series looks at the aftermath of riots from several perspectives. Part I talks about the impact of the Baltimore riots on summer jobs in the community.

The Song Remains the Same

When you discuss the riots and the statement they make about racial tensions with Randall, Aziz, or Muhammad, you are struck by how little they mention racism as the catalyst for the violence, damage, and economic destruction.

“The damage was done by a lot of people who had nothing to do with the protests. They didn’t know Freddie Gray. The same circumstances in troubled neighborhoods have been around forever. They made things a lot worse because it was black rioters costing black business owners a lot of money, and potentially costing them their businesses. Nobody tells that story,â€ says Randall. “I’m glad the protests put a national focus on racial tensions, but don’t mistake what’s really going on here with racism.Â  You had an opportunity for certain people to leverage a situation and take advantage of it,â€ he adds.

“This generation doesn’t have a vested interest in their own community. They don’t have any ties to anything in their community,â€ says Aziz.

John Hope Bryant, founder and CEO of financial empowerment nonprofit Operation Hope, says economic distress is at the heart of the violence. “After 200 years of slavery, and a hundred years of Jim Crow, depression and a loss of hope have become pervasive.Â  It’s to be expected.Â Â  Half of poverty is low self-esteem.Â  In addition, mainstream America has checked out.Â  Today, the No. 1 issue with racism is indifference, not hate.â€

Bryant found haunting similarities to the Baltimore riots and the unrest that took place almost 23 years to the day in Los AngelesÂ  in response to the acquittal of four white Los Angeles Police Department officers in the beating of black motorist Rodney King. According to analysis by the National Bureau of Economic Research, the Los Angeles riots in 1992 resulted in $446 million dollars in property damage alone. That does not take into account the costs of rebuilding residences and businesses, or the opportunity costs that were the result of closing businesses, community centers, and schools.

“They broke my heart.Â  I don’t know what to make of the fact that this unrest in Baltimore comes 23 years after LA. Similarities between Baltimore, LA, Ferguson, and all of the riots, are that the conversation is about the symptoms.Â  We need to look at the trigger points,â€ says Bryant.â€

The Heart of the Matter

“We don’t know how to deal with the frustration that is the result of economics and poor treatment. Take black men, for example. If you’re a black man, you’re intimidating to everybody. That hurts and there is a need to banish those feelings. You don’t see an opportunity to really get your foot in the door and thrive economically. The outlet becomes violence. Economics are at the root, but we don’t deal with the feelings that were the cause,â€ says Green.

If Williams is right, the black community may suffer from the depression and bad feelings that come with racism for a long-time.Â  A study by the American Psychological Association (APA) called Race Differences in the Receipt of Mental Health Services Among Young Adults, found that young adult blacks are significantly less likely to seek mental health services than their White counterparts.

Alana Chavez, a public affairs specialist for the Small Business Administration says feelings of being overwhelmed by economic distress and disaster prevent people from seeking out the help they need.

“When a disaster strikes, a lot of time a person is in the mode of not understanding what happened.Â  They’re consumed by trying to come to grips with the destruction that’s involved.Â  The community is disrupted, and a lot of times they don’t know which way to go,â€ says Chavez.