The Kids Are Alright: Study Shows Tech Not Such a Bad Influence 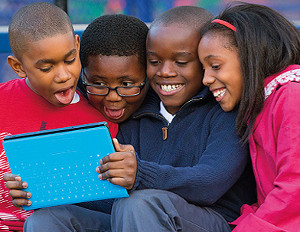 It’s ballyhooed all of the time; kids spend too much time staring at screens. Worries abound that children are turning into these flabby, narcissistic, one-dimensional little monsters–all due to too much tech.

However, a new study from Madeleine J. George and Candice L. Odgers of the American Psychological Association, shows that many of the concerns about the effects of tech on kids is unfounded, and that tech usage has a number of benefits for kids.

The authors of the study counter the argument, for example, that kids who spend so much time looking at their mobile devices, gaming consoles and other screens, can’t foster real human relationships.

“While time spent online does displace time spent with friends and family, for most adolescents frequent virtual communication has been shown to strengthen the quality of existing relationships,” the authors concluded. The study finds that most online interaction between children and their peers is positive. For kids separated from loved ones, mobile devices allow them to remain connected to a non-custodial parent, or to a parent deployed in the military.

There are also a lot of concerns that mobile devices and social media have increased bullying among children. The study suggests instead that technology has merely given bullies new platforms upon which to brutalize, but that incidents of bullying have not increased with the ubiquity of tech.

With four out of five adolescents sleeping with their mobile devices in or near their beds, researchers did discover an increasing disturbance in sleep habits with children and mobile device usage. However, the authors state that the trade-off for kids is beneficial. “While mobile devices may be creating an additional distraction at night, they are also providing new contexts for adolescents to access information, explore sensitive topics, and develop their identity. Adolescents use mobile technologies to get information for schoolwork, understand changes in their health and sexuality, and learn about the news and current events.”

Kids are using technology at an unprecedented rate and also are consuming media at about 7.5 hours per day. Yet researchers insist that childrens’ appetite for tech has little overall detriment.

“Mobile devices do not appear to be a problem for adolescents, but instead are a potential tool for better understanding and [for] supporting their positive development.”