Andra Fuller On Playing A Gay Black Man On The L.A. Complex 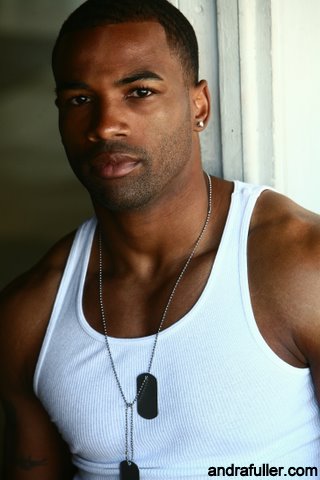 There has been a lot of ink spilled about the underrepresentation of black gay characters in film and television. The National Black Justice Coalition – a civil rights organization dedicated to empowering Black LGBT people – has even teamed with GLADD to help improve the visibility of gay characters of color in the media. The CW also attempts to fill the void with its criminally under-watched showbiz dramedy, The L.A. Complex.

The Toronto-lensed series chronicles the lives of pretty young things living in Hollywood, and their never-ending quest for fame. Newcomer Andra Fuller finds himself at the epicenter of the show’s most talked about storyline. The Houston native plays Kaldrick King, a menacing, volatile gangsta rapper from Oakland who also happens to be gay, closeted and involved in a hush-hush relationship with Tariq, an eager music producer plucked to work on Kaldrick’s new album. Fuller had no trepidations about taking the part, but those around him were leery about his decision.

“When I accepted this role and what it entailed, my family and friends were like, ‘Why do you want to play a gay dude?’ They also wanted to know why every time a Black man is shown on TV as gay; he has to be on the down low. But they didn’t look at the ramification: I’m playing a very successful down low rapper on a network television show. That’s never happened before.â€

Viewers have become enmeshed in the compelling narrative, which explores boundary-crossing topics such as the romance and courtship between two black men, and the social constructs of homosexuality in the oft-labeled homophobic world of hip-hop. Not too taboo, but definitely bold, unchartered territory for a non-cable primetime soap opera. And Fuller, whose impeccable performance is buoyed by sharp writing, navigates it all – from suicide attempts to intense love scenes – with incredible ease.

“As an actor, you don’t run away from a role because it doesn’t coexist with your personal lifestyle,â€ he explains. “If I take a role as a mass murderer, I don’t think I would ever have the gall to kill someone in my real life. But I’m not going to run away from it because I don’t believe in murder.â€

Those may be the words of a seasoned thespian, but Fuller is just getting started. After graduating from Baylor University a year early with degrees in business management and corporate communications, he sidelined his professional football ambitions for a career in entertainment. He cut his teeth hosting Greek step shows, starring in commercials and performing standup comedy in clubs across the country before landing stints on hit shows like Prison Break, Entourage and NCIS. The Jack-of-all-trades has a completed screenplay under his belt, and also writes and performs all of the songs for his character on Complex.

“Entertainment as a whole has always been something I’ve been enamored with,â€ says Fuller, who starred in school plays and took theatre classes as electives when he was in college. “But I could never focus on acting wholeheartedly because football took up so much of my time. So, when I finally had the opportunity to capitalize on it, I moved to L.A. and was like let’s do it.â€

With the second season of Complex wrapped, Fuller is starting to enjoy the fruits of his labor. The film and television offers have begun to pour in – and he’s even got a major record label interested in his music. But for now, the breakout star continues to embrace the outpouring of love and recognition for his trailblazing performance.

“The gay and lesbian community has been super-supportive, very gracious and appreciative of what I’ve been putting into Kaldrick,â€ says Fuller. “It’s definitely an honor to be chosen to play this character in this storyline. I try my damndest every day I step on set to do it justice.â€

The LA Complex airs Mondays at 8pm through October 1 on The CW.