As Schieffer closes with the advice aboveÂ from his mother, the candidates are joined by their wives. They descend from the stage to greet the audience. 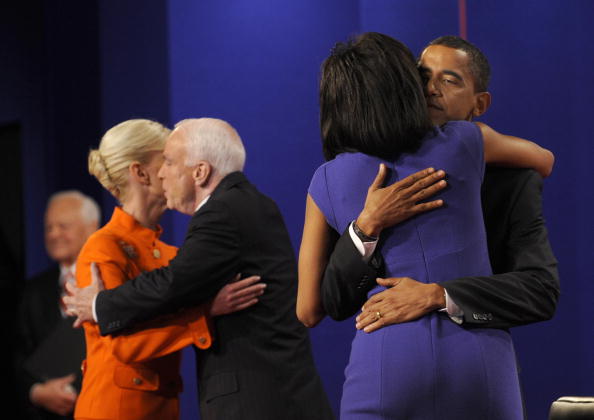 McCain says he has a record of reform and has been a careful steward of tax dollars. He says that the promises and committments that he and Obama made are all based on whether or not you can trust us.Â  He reminds us all that he isÂ a veteran, which assumingly makes him trust worthy.

Obama says the biggest risk we could take during this horrible economic time is to adopt the same failed policies of President Bush. Obama says he has fought for policies that have lifted wages and increased jobs. He promises that if we give him the honor of serving as president he will work tirelessly.

On Education, now McCain is a proponent of choice. McCain says Education is the civil rights issue of the 21st century. Choice and competition among schools is one of the key elements to improving schools.

The candidates are back in attack mode. Obama says that with No Child Left Behind, President Bush instituted unfunded mandates. On Charter schools the candidates agree. The first time tonight. But Obama doesn’t agree with McCain’s support of vouchers.

Obama says our children are not interest groups. He says that his opponent. McCain is condescendinglyÂ surprised that Obama did not recognize Washington D.C.’s successful voucher program.

Obama responds, he acknowledges the education problem in D.C. and commends the mayor for turning the situation around.Â McCain interrupts him and says that the mayor of D.C. supports vouchers. Obama continues by explaining that vouchers still leave students out in the cold.

I would not impose a litmus tests, says McCain as he responds to choosing a judge who does or doesn’t support Roe V. Wade. He calls Obama’s stance on abortion as ideological. Obama says he also would not provide a litmus test, but he believes that Roe was rightly decided. He says that women are in the best position to make the decision about abortion.

“McCain says we have to change the culture of America,” says McCain. “Those of us who are pro-life understand that.” McCain highlights Obama’s vote against a ban on partial birth abortion. McCain says Obama’s record is a direct contradiction to mainstream America.

Obama says that he would not vote to