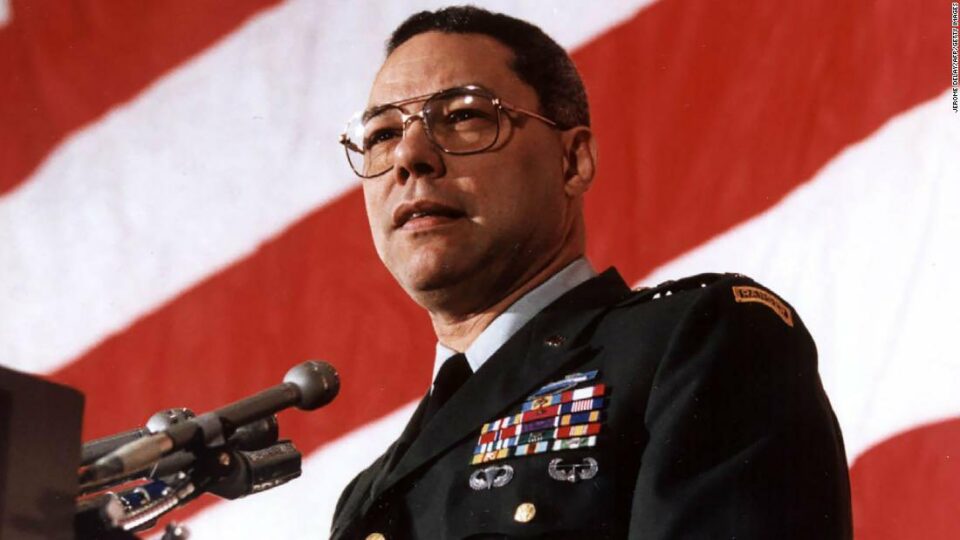 The National Museum of African American History and Culture (NMAAHC) is proud to present the next page from Our American Story, an online series for museum supporters. We offer these stories to honor and celebrate the African American experience, share an immensely rich history and culture, and inspire and sustain our community as we move toward the future together, according to a press release.

General Colin Luther Powell, our nation’s first African American Secretary of State, was a revered military hero, four-star general, decorated veteran and statesman. His accomplishments during his decades of military and civil service—including being a recipient of the Soldier’s Medal, the Bronze Star, a Purple Heart, the Congressional Gold Medal and two Presidential Medals of Freedom, among others—serve as a powerful testament and symbol of the fulfillment of the American promise.

His is the quintessential American story—one characterized by resilience, determination and a deep love of country. In forging his own journey to success, Powell also shattered glass ceilings and paved the way for others in public service.

The son of Jamaican immigrants, Powell was born in Harlem, N.Y., in 1937 and raised to value hard work and determination above all else. He grew up in New York City’s public school system and attended the City College of New York, where he majored in geology and explored the possibilities of a military career by joining the Army Reserve Officer Training Corps (ROTC).

“…I saw these cadets in uniform, and I wasn’t doing well in civil engineering…I was attracted to it. I liked the structure, I liked the discipline, I liked being with a group of youngsters that were just like me with that same inclination toward military activity. And frankly, in City College and ROTC, I found another family. I was leaving family in the Bronx now back with a different kind of family, and I just fell in love with it. I was a straight A student in ROTC.”

After graduating in 1958, Powell was commissioned as a second lieutenant in the U.S. Army. Over the next decade Powell completed Infantry Officer Basic, Ranger and Airborne schools. He served as a platoon leader and commanded a company of the fifth Infantry Division before being promoted to captain in 1962. In December 1962, Powell was assigned to Vietnam as an advisor to a South Vietnamese Infantry battalion. There he was wounded and received a Purple Heart.

Returning home in November 1963, Powell completed the Infantry Officer Advanced Course and was promoted to major in 1966. In 1968, Powell returned to Vietnam. He was decorated with the Soldier’s Medal for bravery after he survived a helicopter crash and, while injured, single-handedly rescued three others.

Following his military service in Vietnam, Powell pursued a master’s in business administration from the George Washington University in Washington, D.C. During this time, he accepted his first of many political positions, serving as a White House Fellow under President Nixon.

In 1986, Powell was appointed Deputy National Security Advisor. Three years later, in 1989, he became a four-star general and was appointed by President George H. W. Bush as the twelfth chairman of the Joint Chiefs of Staff, the nation’s highest-ranking military officer and principal military advisor to the President. He was the first African American chairman and the first chairman who earned his commission through the ROTC. Powell remained in this position for the first few months of the Clinton administration before retiring from the Army in 1993.

He was appointed Secretary of State by President George W. Bush in 2001, becoming the first African American to ever hold the position. Powell’s term in office was marked by the September 11 terrorist attacks and the start of the second Gulf War. He remained politically active after his retirement in 2005, notably endorsing Barack Obama for president in 2008.

The story of Colin Powell is marked by youthful initiative and outstanding public service to the military, the American people, and the country at large. He received bipartisan support throughout his public career, and embodied the determination, patriotism and democratic values that are emblematic of our nation—and in doing so cemented his legacy as an American hero.

“[The National Museum of African American History and Culture] is filling a gap that’s existed in American history for so many years…and now it’s here and it’s beautiful, it’s magnificent, and it’s different than any other thing on the Mall…and I think the American people are going to love coming to this place and completing this part of our wonderful history of this great country.”

Powell was an invaluable member of our community. His determination, patriotism, and character inspired many—from those he led in the military to those he served in government. Powell created his legacy by “being successful every day” and, in doing so, left an immense impact on our nation’s history that will live on for generations to come.