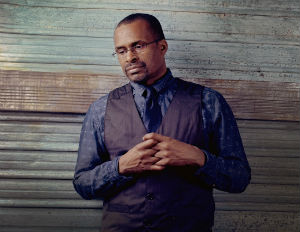 Prolific Playwright/Screenwriter, Keith Josef Adkins, is an artist with a deep concern for African American culture and the challenges facing black America. This sentiment resonates in everything he creates; particularly The New Black Fest, a community-building movement that brings African American playwrights together to tackle the growing racism and injustice issues facing our community. The annual festival empowers black playwrights by giving them a creative platform to simultaneously expand the African American narrative while exploring what it means to be black in a 21st century world.

Adkins’ written works have been performed across the country and highlight the black experience and point-of-view. His plays includeÂ The People Before The Park, Pitbulls,Â Safe House, and The Last Saint on Sugar Hill, among others. He was a writer for the popular CW television comedy Girlfriends, and is the creator of the sci-fi thriller feature film,Â The First, as well asÂ The Disappearing for Simon Says Entertainment.

In addition to the aforementioned panel, The New Black Fest fosters an environment in which black writers can respond creatively to social justice issues. The Hands Up series, a collection of compelling short plays responding to the Mike Brown shooting, were performed at City University Graduate Center. The works took the form of six monologues, all of which were written by black men, and dealt with the age-old topic of race, the impact of racial discrimination in the black community, as well as its effect on the writers themselves. Featured plays included Superiority Fantasy by Nathan James, They Shootin! Or I Aint Neva Scared by Idris Goodwin, and Walking Next To Michael Brown by Eric Holmes, among others.Â Facing Our Truth, a series of ten-minute works, focused on the death of Trayvon Martin, race and privilege, and showcased the dramatic writing of noted African American writers, such as Dominique Morisseau (Detroit ’67) Â and Marcus Gardley (Jesus Moonwalks the Mississippi).

BlackEnterprise.com caught up with Keith Josef Adkins, artistic director of The New Black Fest, to discuss social activism, the role of the arts in bringing about social change, and the significance of his groundbreaking platform, which creates an artistic haven for black artists and their voices.

BlackEnterprise.com: Tell me about The New Black Fest and its role in black social activism.

Adkins: The New Black Fest was started in 2010. I started it because I felt like there was a lack of diversity on stage, as far as the complexity of black voices. That was troubling for me because there seemed to be this one narrative that was being tagged, or branded, as the one black voice. Many white institutions were advocating, producing, and celebrating August Wilson and Lorraine Hansberry, which wasn’t allowing for there to be conversations around other voices that were also a part of the black canon of our experience. I felt like the more we could collectively penetrate the institution with the complexity of who we are, the more we could have an authentic experience, as far as theater-going and storytelling. The initial event was to bring together black playwrights from across the globe, share their voices, and make sure that they were very particular and individual in what they were saying about their own specific communities. For example, we brought Kwame Kwei-Armah who was in London at the time, he’s now the artistic director of Center Stage Theatre in Baltimore, but at the time he was still in London and there was a play he had written about a black Londoner who was running for high office and the specificity around what that means for black Londoners. We also had a play from Chicago that was about black women, coming from an Eastern African experience. So there were all these voices that had very specific things to say about the community; very complex, authentic things to say. We just kept going with the same mission: to advocate for diverse voices that have a certain level of insurgency around them, that would challenge both black audiences and other audiences about what it means to be black, what it means to be in a world where the stakes are so high on so many levels—from environmental, to personal, to spiritual, to economic.

The topic of race and racism in this country continues to intensify, with the protests in Ferguson, increasingly publicized instances of police brutality and, now, the controversy surrounding the death of Sandra Bland. How can, or should, the black artistic community respond?

One of the reasons that The New Black Fest exists is because we as a black community and theater practitioners are always waiting for white institutions—and sometimes even black institutions–to anoint or qualify that what we feel is urgent and important in our own storytelling. So, when issues around race, racism, and institutionalized white privilege, as well as white supremacy, are in our faces and we’re having to see it play out in the media—with police profiling and murders of unarmed black men and women—we often feel like there isn’t a platform for us to exorcise our feelings around it. The New Black Fest was created to give us a platform that was accessible quickly, instead of waiting for some white institution to decide which black playwright they were going to select to speak on race and racism and present that play only to its own audiences, as opposed to having a collective conversation. I think it’s really important for black theater practitioners to create their own impromptu platforms, whether it’s on a street corner, the basement of a church, in the back of a theater or wherever it is, to have these conversations and bring the community into the conversation.