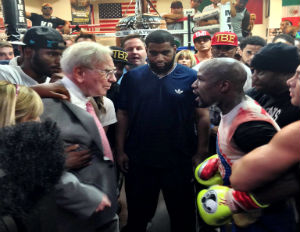 Show me your friends and I’ll tell you who you are. Are the “Oracle of Omaha” and “Money” Mayweather about to invest in a tag team duo?

On Tuesday, Floyd Mayweather posted on social media a picture on of him and multi-billionaire investor Warren Buffett about to square off in a gym in a sort of pre-fight hype photo.

“I had a great meeting with the $66.9 billion dollar man, Mr. Warren Buffett,” Mayweather wrote on his Instagram account. “We talked about how we could turn a $100 million of my assets to $1 billion. Mr. Warren Buffett is the original founder of The Money Team, he’s just one of my billionaire buddies.”

Another tweet announced, “Warren Buffet the $66.9 billion man joins the money team.” Mayweather is the highest paid athlete on the planet. He has grossed more than $400 million since he turned pro. He made more than $100 million from his last two fights alone. He also hasn’t lost a fight.

Buffett recently forked out $3 billion to Burger King to finance its merger with Canadian franchise Tim Hortons. He’s expected to get a 9% return on that particular investment.

Mayweather of course isn’t the only mega-super star athlete hanging out with the 83-year-old billionaire. Buffet and NBA star LeBron James are famously friendly.

James says they have a good relationship and considers Buffet only a phone call away.

Here’s how Buffett described their relationship in a recent article. “I get financial advice from him. He gets basketball advice from me,” Buffett said with a chuckle. “He’s a terrific guy. He’s very smart, incidentally, too. That was the first thing I was impressed with him when I first met him many years ago. For a young guy, he is very smart.”

Someone from Mayweather’s camp shared another photo thanking Buffett for visiting him in the gym.

Mayweather is currently training for his upcoming September rematch against Marcos Maidana.