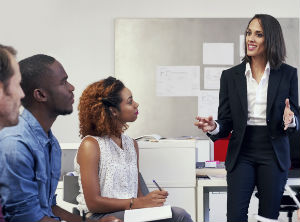 Are you anxious about receiving feedback? Don’t be.

If you’re a leader or want to become one, know this; feedback is an invaluable tool, and smart leaders aren’t afraid to ask for it.

Of the various reasons that feedback is good for learning, growth, and performance, there’s a top one that stands out above the rest: cognitive bias. Â If youÂ thinkÂ that you are more skilled than you actually are and act on that false premise, you can seriously damage your work product, reputation, and in some cases, even your entire career.

The phenomenon behind this otherwise “unwitting ignorance” is called the Dunning-Kruger effect, which is defined as, “A cognitive bias in which unskilled individuals suffer from illusory superiority, mistakenly rating their ability much higher than is accurate. This bias is attributed to a metacognitive inability to recognize their [own] ineptitude.â€

However, leaders simply cannot afford to be grossly mistaken about what they know; the skills they have versus the ones they don’t. They need to know for sure. One way to gain clarity in this area and avoid the Dunning-Kruger effect is to check in and ask for feedback.

Asking for feedback isn’t a sign of weakness. People who ask for it are mentally tough and able to harness the power of constructive criticism. They also have some idea about their strengths and weaknesses, which compels them to seek the advice of those who know more and better, especially where blind spots are concerned.

If you aren’t accustomed to receiving formal feedback at work via regular performance reviews or, for example, via a 360 Degree Feedback system–which involves anonymous feedback given by others you work with including peers, employees, managers, and the like–then you may not know what to expect from the process or howÂ to receive it.

The above referenced methods are simply two of many. But no matter which method of feedback you engage in, it should include a structure for expectations and how to meet them, as well as provide specific instructions on how to correct missteps in the future.

The bottom line is this: If you are a leader and haven’t included regular feedback in your professional repertoire, you are doing yourself and those you serve a grave disservice.

Stop dodging the ball. Get help identifying your blind spots and work to become better.Â Most of all, remember that being grossly mistaken about what you know–the skills you have and the ones you don’t–is a surefire way to negatively impact your work product, reputation, and in some cases, your entire career.

Lead from the front by getting the feedback that you need.

Off to your success!

Karima Mariama-Arthur is Founder and CEO of WordSmithRapport, a boutique consulting firm specializing in professional development. Follow her on Twitter @WSRapport.