The Obama's Open Up About Their Personal Experiences With Racism 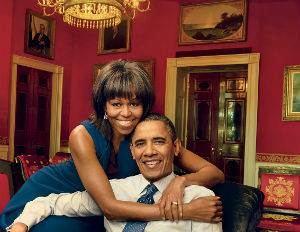 While private drivers, secret service and Air Force One flights are among many things that have drastically changed the way the Obama’s go about living their everyday life, these luxuries of White House residency are still not enough to shield the family from their encounters with racism.

“I think people forget that we’ve lived in the White House for six years,” says First Lady Obama in response to people thinking that the first family is largely removed from having personal encounters with racial discrimination.

In an exclusive interview with People, the first couple added their stories to the national discussion of racial profiling and discrimination that have sparked national outrage around the recent deaths of Michael Brown and Eric Garner.

“Before that, Barack Obama was a black man living on the South Side of Chicago, who had his fair share of troubles catching a cab,” says FLOTUS. “I tell this story — I mean, even as the first lady — during that wonderfully publicized trip I took to Target, not highly disguised, the only person who came up to me in the store was a woman who asked me to help her take something off a shelf. Because she didn’t see me as the first lady, she saw me as someone who could help her. Those kind of things happen in life. So it isn’t anything new.”

Chiming in on the 30-minute discussion, President Obama shared insight on some of the common incidents of discrimination that black men, including himself, tend to face on a regular basis.

“There’s no black male my age, who’s a professional, who hasn’t come out of a restaurant and is waiting for their car and somebody didn’t hand them their car keys,” said the president, while admitting that the exact incident has happened to him before.

FLOTUS backed the president with another recalled incident where Obama was mistaken as a waiter one time at a black-tie dinner.

“The small irritations or indignities that we experience are nothing compared to what a previous generation experienced,” said POTUS. “It’s one thing for me to be mistaken for a waiter at a gala. It’s another thing for my son to be mistaken for a robber and to be handcuffed, or worse, if he happens to be walking down the street and is dressed the way teenagers dress.”