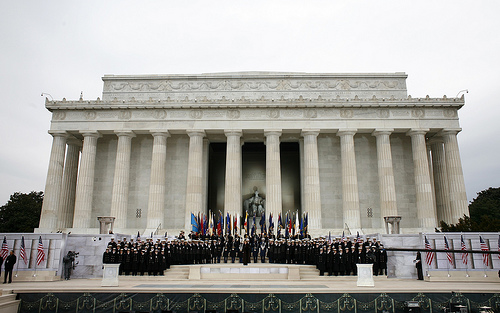 The star-studded concert kicking off four days of official inaugural celebrations brought out tens of thousands to the National Mall in Washington.

When President-elect Barack Obama and his wife, Michelle, arrived, the crowd gathered in front of the Lincoln Memorial erupted in cheers. The crowd is expected to reach bout 500,000 people, who have been waiting in frigid temperatures for hours.

Jamie Foxx did a dead on impression of the president-elect that had the audience and Obama laughing. Martin Luther King III, Queen Latifah, and Denzel Washington are scheduled to read historical passages and Obama will address the massive crowd.

After taking extremely crowded public transportation, concertgoers stood in long security lines to get into the mall.

People came from all over the Washington region and from South Carolina, California and Atlanta; from Maine and Massachusetts, and even Alaska, writes the washington Post.

Earlier today, the Obama worshipped in the 19th Street Baptist Church, which is the oldest and among the most historic African American churches in the District of Columbia. Prior to the church service, Obama and Biden laid a wreath at the Tomb of the Unknowns at Arlington National Cemetery across the Potomac River from Washington.