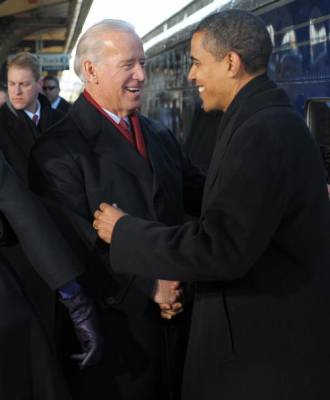 As the Obama train slowly rolled into Wilmington, Delaware, it was greeted by almost 8,000 waving and cheering citizens. They, like others in small towns that the train passed, were caught up in the euphoria of the upcoming Obama inauguration. Even though they were not one of the 15 invited guests to take the historic Whistle Stop Tour, they all had followed Barack Obama’s historic 23-month journey from presidential candidate to the 44th president of the United States.

The train stopped in Wilmington so Obama could pick up Vice President-elect Joe Biden, who will help him pass his ambitious $800 billion economic stimulus plan and serve as he “working families czar.” Biden had said that it was “not everyday that you get to commute with the President of the United States” but it was “more than an ordinary train ride. This is a new beginning.”

As the traveling press and invited guests left the train, they were escorted to Tubman Garrett Riverfront Park, which was adjacent to the train station. The area was filled with a multiracial and multigenerational crowd who braved the bitter cold to cheer Biden, their hometown senator; give the first lady-in-waiting Michelle Obama birthday wishes; and hear what would be another of the president-elect’s inspirational pre-inaugural speeches.

After Biden made a short speech, the Obamas came to the stage. The crowd erupted with applause. Visible in the background was a young admirer holding a placard that read “We The People For 44.” Obama started his remarks praising the new vice president then he turned to the challenges that America faces — especially an economy marked by high unemployment, a surge in home foreclosures and devastation of the financial services and auto manufacturing sectors. However, he said the nation would be turned around, in part, through the indomitable spirit of its citizens. “When we Americans get knocked down we always, always get back up. We know the work can be done but we have to pick ourselves up…one more time.” His call for fortitude and service was met with chants heard so often in his campaign: “Yes We Can.”

He also took time to acknowledge unsung heroes, including one of the invited passengers, Quincy Lucas, an elementary school teacher. Lucas who was on board the Obama train with her husband, Dr. Kevin Lucas, and three children. In addition to sharing the historic milestone of seeing the first black president sworn in, Lucas was excited about her family’s selection because it will bring attention to her fight against domestic violence, a cause she embraced after her sister was killed by an ex-boyfriend several years ago.

“This is an amazing moment in our history and I’m excited that I can share with my children,” she told Black Enterprise.”President Obama will give us all of us hope. His policies will give a boost to education in this country and