Marginalized People and Black People Likely to Bear the Burden if Roe v. Wade is Overturned 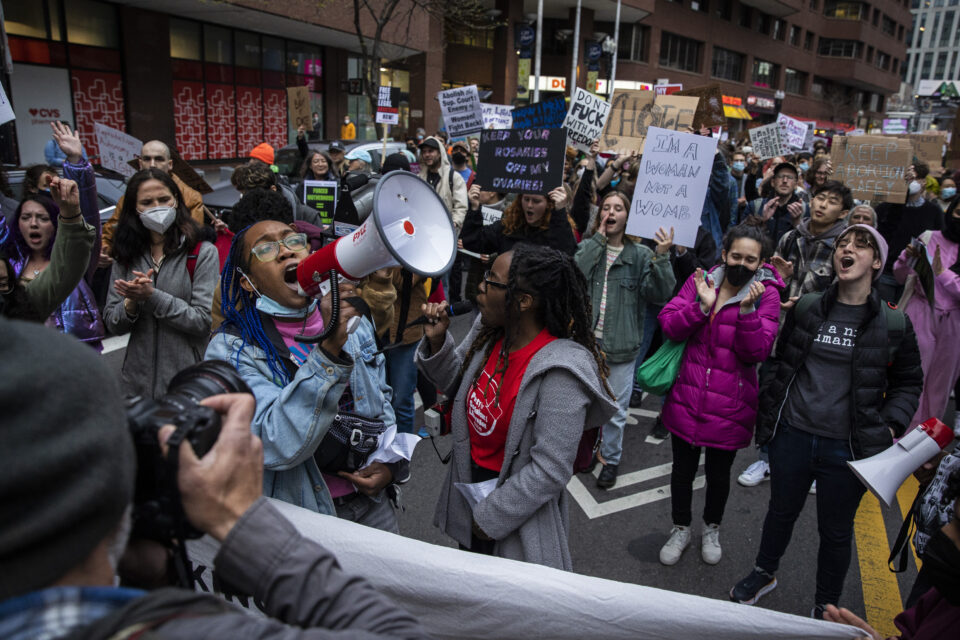 Boston, MA - May 3: Organizers lead hundreds of pro-choice activists in a chant as they march down Stuart Street during a protest at the Massachusetts State House in Boston, MA on May 03, 2022. Pro-choice activists held the protest in light of the leaked draft decision by the Supreme Court and obtained by Politico that suggested the justices are poised to overturn Roe v. Wade, the landmark 1973 case that legalized abortion nationwide. (Photo by Erin Clark/The Boston Globe via Getty Images)

In a leaked draft opinion, Supreme Court Associate Justice Samuel Alito writes, “We hold that Roe and Casey must be overruled.” He said Roe was “egregiously wrong from the start” and called its reasoning “weak.”

The explosive leak signals that the conservative-leaning court is open to overturning the landmark Roe v. Wade decision that legalized abortion. The issue is being pressed by Republican-led states passing increasingly restrictive laws that essentially outlaw the medical procedure. A Supreme Court decision could return the option to states to outright ban abortion.

USA Today writes that people of color, poor people, and other marginalized communities are most likely to bear the burden if abortion is banned in the U.S.

“We know that it’s going to impact those who already have barriers to healthcare, even before an abortion ban,” women’s health and reproductive rights policy expert Fatima Goss Graves, an attorney and president of the National Women’s Law Center, told USA Today. “Those who live in rural areas, women of color, those who have low income.”

Overturning the verdict could leave women in rural and southern locations with little-to-no options, including attempting to travel to obtain a legal abortion.

“This will be a giant and larger hurdle placed in front of them,” Goss Graves said. “Most people who seek abortion care already have children. And they may not have time off work, access to child care, the things they need to be able … to leave their community to get constitutionally protected healthcare.”

The leaked opinion is alarming, to say the least. “It is very concerning, and very alarming and would devastate access for many millions of women in the United States,” Elyssa Spitzer, Center for American Progress attorney and women’s health policy analyst, said. Subjecting women to carry an unintended pregnancy to term “is immensely painful, and arduous and a violation of human rights.”