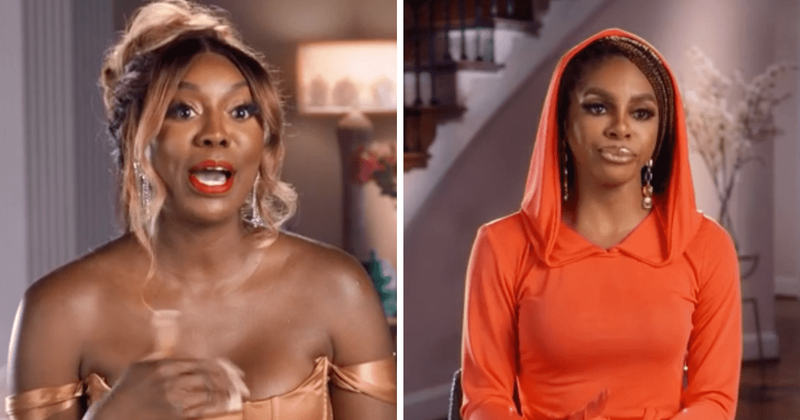 The Real Housewives of Potomac is under fire for the treatment of the two sole brown-skinned cast members from the predominantly light-skinned cast.

Wendy Osefo and Candiace Dillard have somehow become the main targets in season 7. The new season premiered last month and has showcased the developing feuds between the cast of alpha women.

Elsewhere, Robyn Dixon has carried her season 6 quarrel with Wendy into season 7, and has seemingly used every chance to go toe-to-toe with the Johns Hopkins professor.

Amid all the feuding, a clip revealed the plot Ashley orchestrated during the Miami girls’ trip to force Wendy and Candiace into the only room with one bed.

But after OMFG Reality TV shared the clip on Twitter, many fans started sounding off on what they believed was colorism within the cast.

“Yeah. This is getting hard to watch,” added someone else.

Another clip showed the moment Mia Thornton threw a drink at Wendy, following a verbal spat during a group dinner. The behavior displayed against Wendy rubbed some viewers the wrong way.

“See what pisses me off is that @WendyOsefo being a dark skin black wmn will still have to carry herself with grace during this whole thing,” one fan quipped.

“Becuz let’s be clear she has more to lose and they will paint her with the angry black woman stereotypes so quick. It’s truly sickening #rhop”

See what pisses me off is that @WendyOsefo being a dark skin black wmn will still have to carry herself with grace during this whole thing becuz let's be clear she has more to lose and they will paint her with the angry black woman stereotypes so quick. It's truly sickening #rhop https://t.co/dIs3tRs1tt

Amid the backlash, Ashley took to her Instagram story to shut down the colorism claims and explain how unbiased she is when shading a cast member.

“So, I really hate that I have to say anything about this and that I have to address this, but it seems to have just gotten, like, way out of control,” she said in the post captured by Jay’s Reality Blog.

Ashley says that she’s not a colorist, & has had issues with every woman on the show no matter what the color of their skin was. #RHOP pic.twitter.com/DyvzbgtrRb

“First and foremost, I am not a colorist,” she declared.

“I know everyone wants to deem me that. They want to make all these accusations about me because of my own skin tone, but I don’t claim that because that’s not me.”

Ashley went on to note the times she had feuded with several other castmates — including Robyn and Gizelle — and each time, she never took “the hue” of anyone’s skin color into consideration.

“I always start at a hundred with people until you give me a reason to take it down,” she continued.

“That is all that has transpired. I still care about the women on this show and I hope that everyone — including them — knows that nothing that I will ever feel about you is because of your color of your skin.”

The colorism debate has been brought up on RHOP in the past, but the debate clearly continues. Considering the strong responses from viewers, it will likely be addressed at the season 7 reunion.