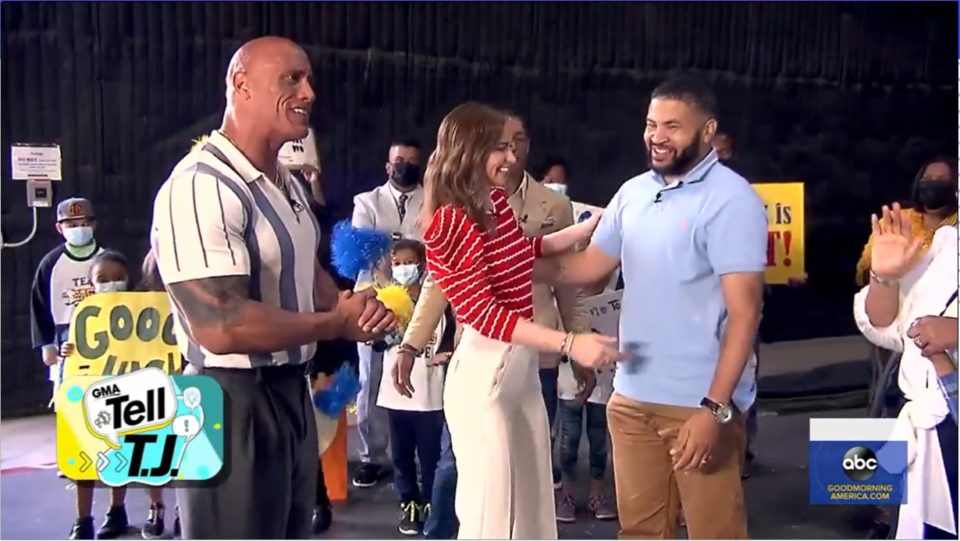 Tylan Bailey of Atlanta serves as a reminder that hard work coupled with determination can lead to tackling tough goals at nearly any age.

The father of four, who once worked as a custodian for 23 years as Hightower Elementary School’s head custodian, had a dream to switch careers and become an educator. On Monday, he was surprised live on Good Morning America when “Jungle Cruise” stars, actress Emily Blunt, and actor Dwayne “The Rock” Johnson surprised him, his family, and school supporters, to honor Bailey for accomplishing his longtime educational goal.

Bailey’s journey can now inspire kids to push through obstacles to achieve greatness.

In 2017 at the age of 39, Bailey empowered himself by enrolling “at Georgia State University to pursue a bachelor’s degree in physical education,” according to Good Morning America. Bailey stayed committed to studying late at night, working, and balancing fatherhood. The Georgia State University alumnus who graduated from college in his forties was humbled by all the love.

“What a journey and how inspiring your story is,” Johnson said, during the segment. “We’re proud of you. Your beautiful family is proud of you, too.”

Blunt and Johnson invited the longtime custodian-turned-teacher to the California premiere of their new movie, as well as roundtrip airfare to California for him and his family, plus hotel rooms and park passes at Disneyland,” ABC News reported.

In the fall, Bailey will begin a new chapter as a physical education teacher who works at Atlanta’s Briar Vista Elementary School, according to Good Morning America. Other surprises which were mentioned in the Good Morning America video included a $15,000 donation provided from Echelon for his new school home and an Echelon bike and treadmill for the new teacher to keep in shape.

“Your blessings will come to you if you go for it,” Bailey said in the story.