The Role of Individual Contributors in Building Diversity, Equity, and Inclusion at Work 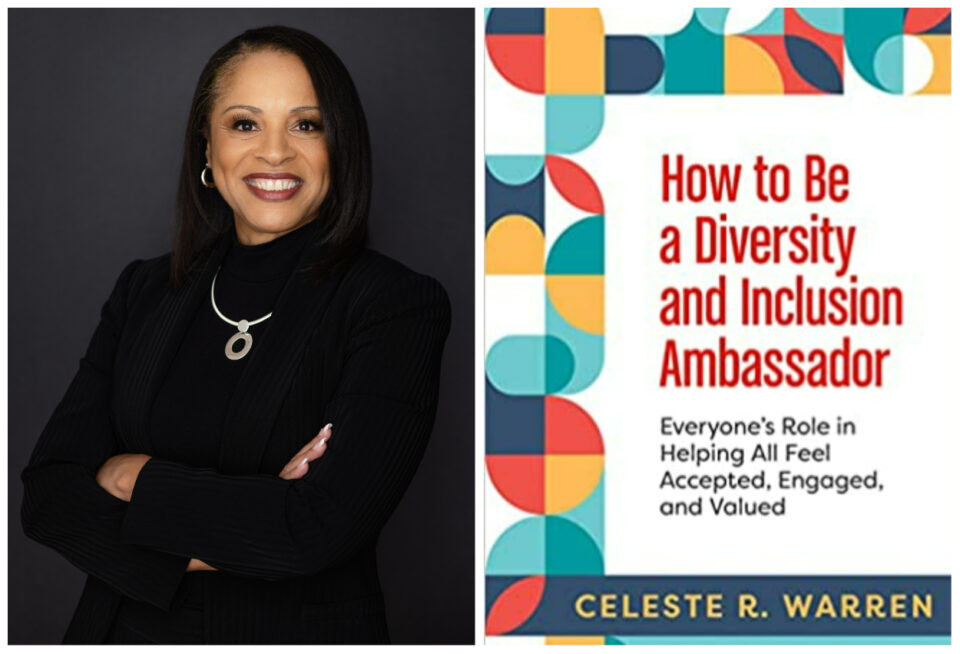 Excerpt from the book How to Be A Diversity, Equity and Inclusion Ambassador: Everyone’s Role In Helping All Feel Accepted, Engaged, and Valued by Celeste R. Warren

A few years ago, I was attending a conference and had just finished participating in a panel discussion. There was a young lady waiting patiently as I spoke to other individuals who had attended the event. I finally wrapped up the group conversation and walked over to her. I thanked her for waiting to talk.

She introduced herself and proceeded to tell me that she had so much passion for diversity and inclusion within her company, but she didn’t feel like she could relate to the discussion by the panelists she just heard.

I asked her why she felt that way and she said that it seemed as though we were talking about what people in management positions or people in positions of power could do. She didn’t feel as if she could make an impact on diversity and inclusion within her organization because she didn’t manage people.

This is a common misconception by employees in organizations who are “individual contributors,” or people who do not manage other employees. But this couldn’t be further from the truth. Employees who are not people managers are still instrumental to organizations’ creating a diverse and inclusive culture.

As an individual contributor, you can be a very influential diversity and inclusion ambassador.

If you have never done a self-assessment before, it’s actually not that complex. There are several ways you can approach it. Let’s take a few minutes to explore each of these different ways to determine how good a diversity and inclusion ambassador you are. One way is to sit down and think about your behavior at work over the past year. How did you “show up” in meetings, in gatherings with your co-workers, in one-on-one engagements with your peers? Do you know what it means to be inclusive and demonstrate inclusive behaviors? There are a few behaviors you should think about as you reflect.

First is courage. How willing were you to get out of your own comfort zone and engage in difficult conversations? I can recall when I was starting out in my career, I was in a meeting with several peers, and I was one of three women in the room. At one point during the meeting, the men were dominating the meeting and not letting any of the women (including me) get a word in edgewise. After a significant period of time, I spoke up, loudly, and voiced my concern over a particular issue. The other women looked at me, smiled, and then began voicing their opinions as well. The guys got the point and were more inclusive the rest of the meeting. My initial interruption during the meeting so others could get their points across was an act of courage, not for myself, but for the other women in the room who were feeling the same way I was at that time. Once the men realized they were excluding me and my female colleagues from the discussion, they corrected their behavior, and the meeting was actually quite productive afterwards.

Courage doesn’t mean you have to pound your fist on the desk; it only means that you may have to insert yourself into a situation as a solution. We don’t do it always, but generally do you demonstrate courage? Do you engage in conversations that could be characterized as difficult or courageous? When was the last time you had a discussion about the different perspectives of diversity with a work colleague, or interject when you heard someone marginalizing another co-worker? Another behavior to think about as you conduct your self-assessment is bias.

Everyone has biases. Recognizing them, understanding them, and preventing yourself from acting on them is the key. There are many online tests you can take to examine your own unconscious bias, but a simple way is to think about times when you have encountered some information that you are unfamiliar with. What are your immediate thoughts? Are they based on some preconceived notion or belief? As you process the information, do you rely on unsupported or unsubstantiated claims? Is your “self-talk” one-sided? Or do you take the information and process it in a more holistic way with a 360-degree view, in an attempt to see different perspectives on the information? Depending on how you answer these questions, this is one way to understand the depth of your unconscious bias.

After you have had the self-reflection, the next way to assess your ability to be a diversity and inclusion ambassador is to ask those around you. Ask your co-workers how they view you. Do they see you as a diversity and inclusion ambassador? Do they see you demonstrating inclusive behaviors with them? Do you make people feel included or do you demonstrate an exclusive demeanor?

Try to be specific about the behaviors you want them to provide feedback on. For example, you could ask them about how they view you as an ally. An ally is someone who is not a member of an underrepresented group but who takes action to support that group. It’s traditionally viewed that only those with privilege or who have some aspect of power can be allies, but in today’s world, where the various dimensions of diversity are continuously growing, all of us have to be an ally in order for us to make true progress in creating an inclusive culture. We should all be allies to those who identify differently than we do and take responsibility for making changes that will help others be successful.

So, as you are assessing your ability to be a diversity and inclusion ambassador, ask your friends if they view you as an ally. Ask them for specific examples when they have witnessed you demonstrating allyship. In addition, you should ask them about times when you had the opportunity to act as an ally and you did not. These specific examples will help you in your assessment by providing real, tangible examples of what might need to change or evolve in your behavior to help you become a true diversity and inclusion ambassador.

You should also ask your colleagues how you are as an advocate. An advocate is someone who supports, promotes, and pleads for or, on behalf of, another person. They may advocate for a person who identifies differently or for another community that is different from their own. An advocate uses their own platform to bring attention to injustice and to effect change. Someone who strives to be a true diversity and inclusion ambassador will take the time to be active and visible for groups of employees or organizations from different groups.

It’s important for diversity and inclusion ambassadors to know the difference between allyship and advocacy: they both require active support, but the support looks different. Let me provide some simple examples.

Earlier in my career, I remember sitting in a meeting with ten or so of my co-workers. The manager was having a hard time with the meeting because an unproductive debate was starting to feel toxic. People were raising their voices and interrupting each other frequently. One of my colleagues in particular felt she couldn’t voice her opinions without being shouted over. At a moment when everyone was literally taking a breath and preparing to launch into another round of heated dialogue, I said that the colleague had not had an opportunity to voice her concerns on the initiative we were talking about. I then turned the floor over to her. She shared her viewpoint, which provided a viable solution to the problem the team was discussing. If she hadn’t had the opportunity to speak up, who knows how long the team would have spent spiraling in the unproductive discussion? That is an example of being an ally by ensuring that someone’s voice is heard and not marginalized.

Advocacy looks a little more public. As an author, public speaker, and diversity and inclusion leader, I have the opportunity to speak out on behalf of different groups of people, especially communities who are disadvantaged. I have spoken out on behalf of colleagues in the LGBTQ+ community to voice concerns about the disparities that exist for them in the healthcare system, for example. I have had opportunities to raise awareness on the issues impacting Native American and indigenous peoples across the nation. Leveraging one’s platform, whatever platform that might be, is an example of advocacy.

Another question you can ask your peers is about your adaptability. Adaptability means being able to rapidly learn new skills and behaviors in response to changing circumstances. Someone demonstrating adaptability in the workplace is flexible and has the ability to respond effectively to their working conditions—even if things don’t go as planned. Adaptability is an important capability for a diversity and inclusion ambassador. The skills and behaviors that support adaptability are also important to be effective: active listening, asking questions when unclear, emotional intelligence, self-awareness, and paying attention to nonverbal cues are examples of skills that help someone adapt.

Talk with Your Manager

A third way to determine your skills and capabilities as a diversity and inclusion ambassador is to set up time with your immediate manager and ask about your inclusive behaviors. Ask your manager what your greatest inclusive skills and behaviors are and in what areas you could develop. The viewpoints from your manager are very important because they give you an opinion viewed through the lens of a leader within the department and organization.

Getting an assessment from your manager also helps you in other ways. It demonstrates your commitment and passion. Managers want to see engaged and energized employees, so seeing your enthusiasm and support for a diverse and inclusive work environment benefits the department. It also shows the manager that you are fully engaged in the wellbeing of the department, your co-workers, and your commitment to the company.

Leveraging your managers for an assessment of you as a diversity and inclusion ambassador also shows your professional potential. When you ask about how you are viewed as an employee who strives to demonstrate inclusive behaviors, you have the chance to share your skills, abilities, and potential with your manager which might lead to more career opportunities.

Finally, getting an assessment from your manager provides you with an opportunity to talk about your short- and long-term goals and ambitions towards becoming a diversity and inclusion ambassador. Your manager can then help you gain the necessary skills and education to achieve them. As you can see, taking the time to assess your ability to be a successful diversity and inclusion ambassador is an important step in your journey. Leveraging your co-workers, colleagues, and manager can help you in your quest to drive change.

Celeste R. Warren is vice president of the Global Diversity and Inclusion Center of Excellence at Merck. Prior to joining Merck in 1997, Warren worked for nine years in human resources at Kraft Foods and General Foods. She has been honored with many awards, including Black Enterprise’s Top Executives in Global Diversity and Inclusion, Savoy magazine’s Most Influential Women in Corporate America, Women’s eNews’s 21 Leaders for the 21st Century, and Diversity Woman magazine’s Elite100 List. She is also a member of CNBC’s Workforce Executive Council and World 50’s Inclusion and Diversity Impact Community.