The Roots Picnic Returns For Its 6th Year, Group Honored with Mural 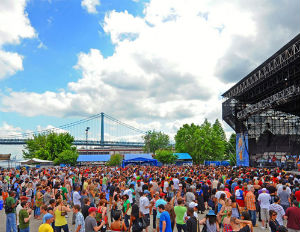 Unknowingly to many, Philadelphia is one of the nation’s most historic and thriving eclectic musical communities. With hometown legends such as Franky Beverly, Patti Labelle, Jill Scott, Eve, Floetry and The Roots themselves, Philadelphia has continued to breathe air into fresh, emerging talent throughout the past few decades.

Returning for its sixth year,Â The Roots Picnic was bigger and better than ever with one day of incredible and diverse music at the Festival Pier at Penn’s Landing along the Delaware River. Sponsored by Philly360, the annual event serves as both an unofficial kickoff to the outdoor summer music season in Philadelphia.

Aside from the Roots, concert attendees were able to enjoy a diverse group of artists which included Solange, Naughty by Nature, Gary Clark Jr., Trinidad James, Hit-Boy, Robert Glasper, in addition to surprise guest appearances from Marsha Ambrosius and hometown rapper Meek Mill.

In addition to the festival, the GRAMMY award winning band returned to their roots in Philadelphia on Friday evening for the dedication of a multistory mural in their honor in the South Philadelphia section of the city where the group used to reside. The artwork, titled “Legendary,” is a colorful collage of images including portraits, cassette tapes and musical instruments that traces the history of the hip-hop group.

“This is one of the greatest moments of our career,” said Roots drummer Ahmir “Questlove” Thompson. “I’ve forever driven the streets of Philadelphia wondering, when are we getting our mural?”