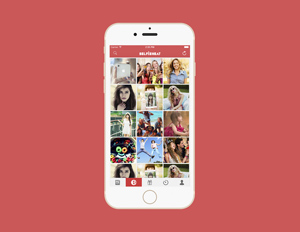 It has been proclaimed that 2014 was the year of the selfie–an image of oneself, taken by oneself. Last year the word was added to the Merriam-Webster dictionary, and in March 2014 Techinfographics.com reported that more than one million selfies were taken daily.

But in 2015 that number might be a drop in the bucket after SelfieHeat launches this month. The app, which is solely dedicated to the selfie, will at some point allow users to win hourly, daily, weekly, or monthly prizes ranging from pizzas to porsches, says Myron Anderson, CEO of parent company Xelxor Technologies, which is based in Orangeburg, South Carolina.

“Posting selfies is a big thing now. People like to show off and tell stories,â€ notes the 63-year-old former judge who has been building educational websites for 12 years. “But even more important, people like to win prizes. And why not get rewarded for doing what you’re already doing,” he suggests.

Indeed, one market research report found that the overall market for gamification tools, services, and applications is projected to be $5.5 billion by 2018.

SelfieHeat users can post multiple selfies for a single prize. All contests will end after a predetermined time. The post with the most votes at the time of expiration wins.Â  Like any social network, in addition to voting, members can create friend groups, gain followers and solicit votes from their followers.

Posters can choose to link their image in one of six general categories, including ones for males, females, funny selfies, babies, pets, and sexy selfies.

“The app will send out push notifications relative to upcoming contests,â€ explains Anderson. “It will tell you ‘Post a photo in the next 10 minutes and you could win a prize.’

Military users may post in any category, but will also have a designated category where they will be given opportunities to win military-specific campaigns. There are also special categories where professional athletes, celebrities, and politicians can compete to win prizes for their charities. Members can also search selfies by keyword to find, for example, the funniest or sexiest selfie of the day.