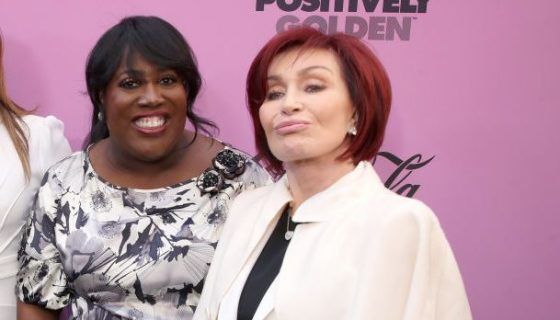 CBS has determined that more time is needed for its investigation of racism levied against The Talk co-host Sharon Osbourne after she was involved in a heated discussion with co-host Sheryl Underwood while she defended British journalist and TV personality Piers Morgan. She was then accused of racist rhetoric and comments by some members of the talk show’s staff which triggered the investigation.

According to PageSix, The Talk was initially placed on hiatus after Osbourne defended Morgan, who had stormed off the set after saying he didn’t believe Meghan Markle’s complaints of racism against the royal family. Osbourne was then accused of racism by several colleagues who have worked with her. The show was supposed to return on March 22 but the hiatus has been extended once again.

“Everyone is in limbo and wants this to be over,” a source has told Page Six. “There’s still no clear understanding of what the outcome is going to be. They have to thoroughly look into all of this stuff. There’s a lot of new leadership and they don’t want to repeat the days of Les Moonves where things were often ignored and let go. They’re looking into all of the allegations.”

New York Magazine/HuffPost Contributor Yashar Ali gave a breakdown from his Twitter account on the situation leading up to the recent delay.

1. Exclusive: Sharon Osbourne, co-host of the CBS daytime panel show “The Talk,” would frequently refer to then-co-host Julie Chen, who is Chinese American, as “wonton” and “slanty eyes,” according to multiple sources. https://t.co/6A4DrRnSVx 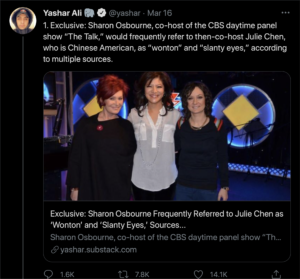 2. After Osbourne’s former colleague Holly Robinson Peete said Osbourne referred to her as “ghetto” and got her fired from “The Talk”, Osbourne had her attorneys send a cease and desist letter saying if she didn’t delete the tweet below, she would be sued
https://t.co/yxDdy7SDyZ

3. In response to an extensive list of details in my story, Sharon Osbourne’s publicist Howard Bragman sent me this statement.

4. After @hollyrpeete said last week that Sharon Osbourne referred to her as “ghetto,” not only did Osbourne deny it, she denied ever using the word except to refer to Nazi Ghettos.

But in 2011, she referred to @LeahRemini as “ghetto,” because of the way she talks. pic.twitter.com/EfScyegqso

After my story posted, CBS sent me this updated statement announcing that they are extending the hiatus of “The Talk” until next Tuesday.

Previously, “The Talk” was set to return tomorrow.

6. In her first interview since my story posted this morning, Sharon Osbourne compares her co-host Sheryl Underwood calmly asking her about a tweet to her co-host @ElaineWelteroth being asked why white people can’t say the n-word.

7. ET host @KevinFrazier is coming under fire for giving a softball interview to Sharon Osbourne where she largely deflected blame and then suggesting that Holly Robinson Peete and Sheryl Underwood, two of the Black women who were targeted by her, join her for a summit on racism. pic.twitter.com/5Vx8e4561o

A source familiar with the matter tells me that CBS is extending the hiatus for “The Talk” for a third time.

This hiatus will last through next week.

This is happening while CBS conducts “an internal review.” https://t.co/jmkos23Qa9