The Ultimate Road Trip: Fishing for Trout and Memories 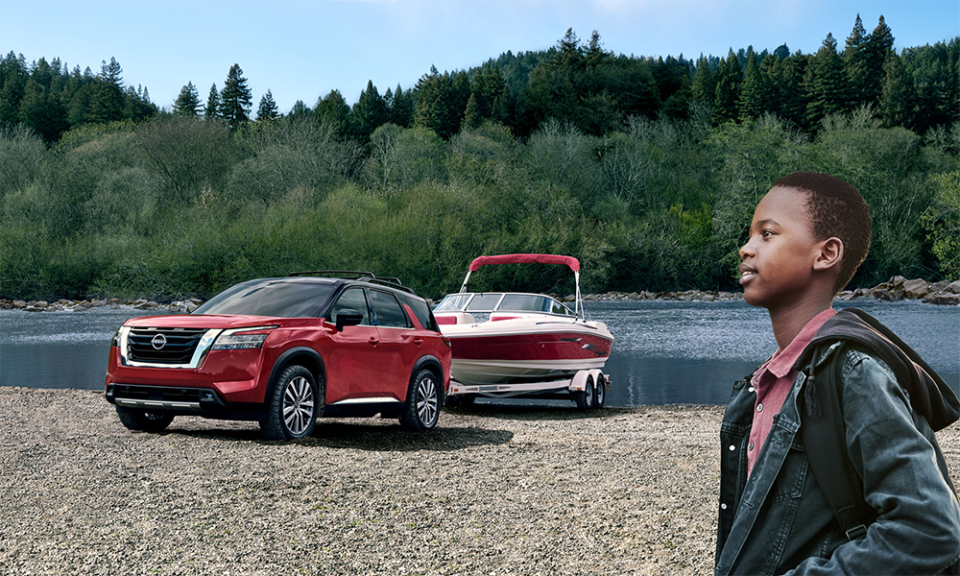 The Andersons are still exploring the waterways of Central Pennsylvania. After an exciting day kayaking in Prompton Lake, they’ve taken their all-new Nissan Pathfinder some miles south, just outside Harrisburg on the lip of the Susquehanna River. Denise is eager to meet up with an old college friend, a professor at Lebanon Valley College, but her husband Darryl wanted to get in some fishing time first. While the family slept in, Darryl, and his son Zane, 15, tossed their gear into the Pathfinder and made their escape! Young Zane shares his experience.

Pop loves to fish. Give him half a chance, and he’ll go on and on with his epic stories about “the big one” he almost caught that one time. I’m not sure what kind of fish it was, but it sure gets bigger and scarier every time he tells the story. We’ll be in “Jaws” territory soon. (LOL!)

I give Pops a hard time about his stories, but the truth is they inspired my love of the sport. My sisters never got into it, so now it’s “our” thing.

I think it started with the way he always talked about fishing with his father. He laughs a lot, remembering. I’m pretty sure that I’ll think about our fishing trips together the same way when I’m older. Maybe this winter, the two of us can take the new Pathfinder up to New England and try ice-fishing. I read that Moosehead Lake in Maine is a great spot. We can land some brook trout, and Pops can test out all the Pathfinder’s driving modes getting us there, from Snow to Mud/Rut to Eco.

It was still dark out when the two of us headed out this morning. While everyone else was knocked out, we crept out of the hotel, loaded the fishing gear we rented into the back of the Pathfinder, and made our way to one of dad’s “secret” fishing spots. The hawk was out this morning, so I didn’t mind when he turned on the Pathfinder’s heated seats. And I’ve got to say that the Head-Up display on the windshield is on point! I’m looking forward to driving lessons in the Pathfinder when I get my learner’s permit. Only five more months!

The road was empty, and it was nice having the Pathfinder to ourselves. There was nothing but the sound of the road and the hum of the engine. We were warm and comfortable in the car’s cabin, enjoying the calm of the early morning. You don’t catch fish by making noise, anyway. The trash talk comes later.

The fishing was good; we had more than a few bites. I caught a couple of decent-sized walleye. Pops hooked some nice trout, our contribution to tonight’s dinner at the home of mom’s college roommate, who’s having a cookout. There was this one fish, though; it was a giant catfish. I saw it come to the surface just before it grabbed my line. We wrestled for a good while, but just when I thought I’d wore him out, the fishing line snapped.

Oh well. At least I left with my own story to tell. And did I ever. “Mom, you should have seen that fish! It was a beast!”

Next up: Zip line courage and more adventures on the road…

FacebookTwitterYoutube
← Nick Cannon Said God Willing He’ll Have More Kids, But Black Twitter Said Leave God Out Of It ← MTV Entertainment Group Joins Forces With Music of the Sea To Include Music From Diverse Creators In Its Content
×