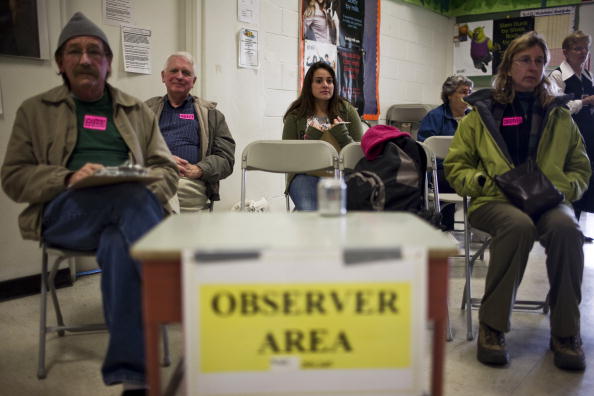 CINCINNATI, Ohio — They won’t tell you their name, they won’t tell you where they’re from, all they want to know is, “Did you have any problems voting and if so, they’ll take care of it.â€ Â No, you haven’t been shaken down by the Midwest Mafioso. You’ve just met a watcher. Â

Upon further prodding most will turn their back ever so slightly, obscuring their interrogators view, surreptitiously peek toward the back of a two-inch thick three-ring binder stuffed neatly with nearly half a ream of printed material and offer the media relations number for their respective organizations.

These mysterious women and men of all races, and ages walk softly and carry a big binder. Â When questioned, most simply reply that they do not talk to the press.Â

“We think that one is a Republican plant,â€ remarked a state of Ohio certified inside poll observer, who declined to give her name at one Winn Este Avenue’s five polling locations, head pointing to a kind faced, short statured Caucasian gentleman with glasses — the state certified outside observer.Â

And so the Ohio Democratic Party poll watchers and the line manager for the Obama campaign watched him. There were poll watchers from Election Protection. There were even international watchers, political science students from the University of Amsterdam that were observing this historical election. And an unidentified 64- year- old poll watcher, from the Cincinnati NAACP said she was watching them all.

At one point there were five individuals from three different organizations at Precincts 24-L and 24-E at Mother of Christ Catholic Church in Spring Grove, one of Cincinnati’s most densely populated low income areas. In a neighborhood with historically meager voter turnout, from 6:30 a.m. to 10:30 a.m. there was a line that went out the front door and wrapped around to the rear of the church. Approximately 15% of the 384 ballots casts at this location were provisional.Â

In Ohio, almost three hours after the polls closed the Obama-Biden ticket garnered 52% of the popular vote compared to McCain-Palin’s 46%. Although there were reports of broken voting machines that necessitated paper ballots in the predominantly middle-class Caucasian neighborhood of Mariemont and the mixed race middle and working class Â Columbia Township, there were very few reports of voters being turned away without casting their ballot or violence at the poles, besides an unsubstantiated report of a female Obama canvasser being slapped in the face by an unidentified male, who allegedly yelled, “No Negro should be in the White House.â€Â

No matter who their candidate was, what their respective organizations were, what color binder they carried or even their own personal political views; all the official and self proclaimed watchers of the Ohio election process all echoed the sentiments of Ohio Democratic Party canvasser and self-appointed poll watcher Charles Williams.

“I’m just here to make sure everybody comes out and can vote,â€ said Williams.