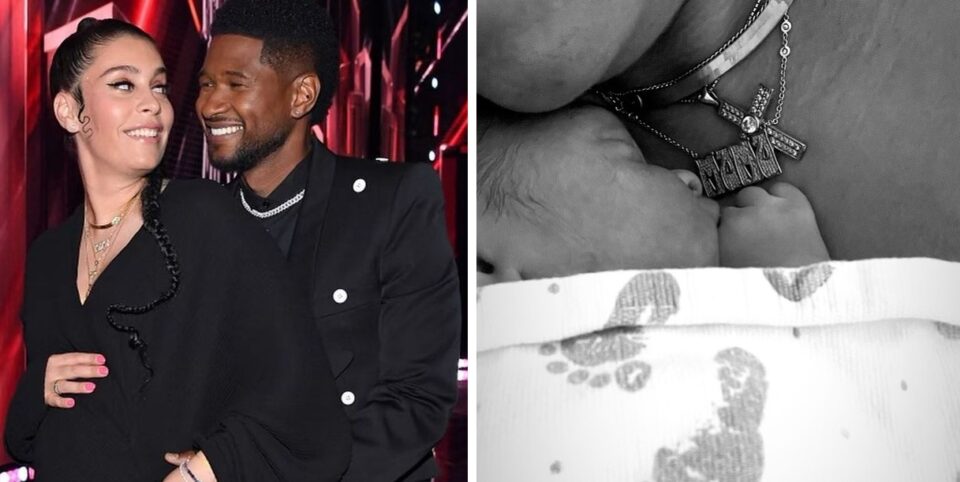 Usher and partner Jenn Goicoechea announced the birth of their second child on Tuesday, two weeks after the little boy was born.

The couple each posted black and white photos of their new addition, Sire Castrello Raymond, with Usher sharing that they welcomed their son on Sept. 29. The couple’s daughter, Sovereign, turned one on Sept. 24.

In the caption on her post, Goicoechea revealed the origin of Sire’s middle name, explaining to her followers that he is named after her grandfather, Champ Castrello, who recently died at the age of 105. “Champ was the strongest, bravest, family oriented, funny, kindest man I know… (other than my baby father lol),” the Epic Records exec wrote. “I couldn’t ask for a better example of how a man should be! He was the definition… it was only right we keep his name alive.”

The couple was first rumored to be an item in 2019, but managed to avoid confirming their relationship until a subtle Instagram post in February 2020. The following August, US Weekly was the first outlet to confirm the pair was expecting their first child together.

Usher is the father of two older boys—Usher V, 13 and Naviyd, 12—with ex-wife Tameka Foster Raymond. Shortly after Sovereign’s birth, the singer told Ellen Degeneres that his older boys were “excited about being big brothers.”

“They’re a little bit too protective, even with me sometimes,” he added. “And as they get older, I’m less cool of a dad, so now I’m starting this whole cycle over again and I’m kind of the apple of [Sovereign’s] eye right now.”

Between the birth of his youngest two little ones, Usher launched a residency at The Colosseum at Caesar’s Palace in Las Vegas on July 16, to great fanfare and critical acclaim. The 90-minute set has been a hot ticket item since its opening night.

Usher will remain in Vegas through January 2022.