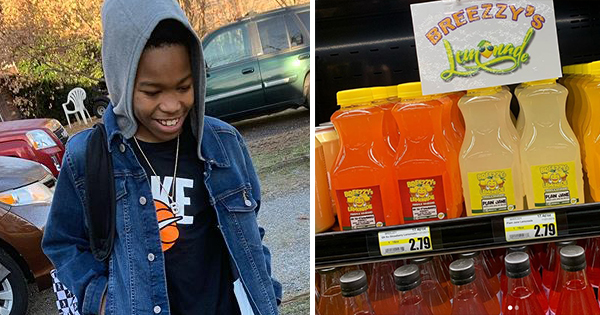 Aubrie Greene, an 11-year-old boy living with autism in Richmond, Virginia, asked his mother, Ceydria McCray, for a lemon squeezer that was on sale at Bed, Bath & Beyond. He wanted it so he could create his own lemonade recipe. “Aubrie ended up sending me a picture of a lemon squeezer,” McCray told ABC 8 News. “It was at Bed Bath & Beyond on sale for $19.99 and he asked me to grab it up and I did.”

The same day McCray bought Greene his squeezer he quickly went to work on his lemonade recipe; his mother happily took samples of her son’s drink to her office where they raved about the lemonade. “They requested gallons,” McCray said. “We ended up getting cups, from cups to pouches, pouches to jugs that I was getting at the dollar store and now we got sealed bottles.”

This was how Breezzy’s Lemonade was born.

Greene’s special lemonade caught the attention of the local The Market @ 25th, which offered to put his bottles on its shelves. “It’s a really fast-moving product and people want it. It was really impressive when it first came in and people were coming in asking where it was, but it was already gone,” said Derek Houston, business analyst at The Market @ 25th.

Since opening his lemonade company, Greene has added a variety of flavors, including Plain Jane, Grapeade, Tango Mago, Striker, and Dragonfruit.