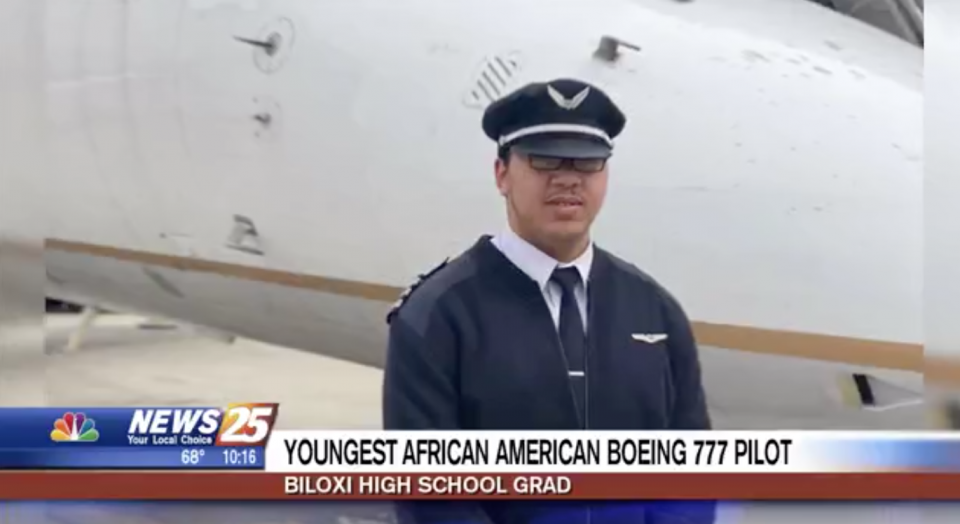 In 2019, the Bureau of Labor Statistics reported that only 3% of U.S commercial airline pilots were Black. Despite the lack of diversity, many Black aspiring pilots have defied the odds and fulfilled their aviation pursuits.

One Biloxi, Mississippi’s native dream and dedication allowed him to make history at an age when most of us are trying to figure out what to do next.

Twenty-three-year-old Malik Sinegal is now the youngest African American ever to become a certified Boeing 777 pilot in the country — a feat he wasn’t even aware he had accomplished until he was contacted by a representative from Boeing to congratulate him.

The Boeing 777 is the world’s largest twinjet plane, and it’s usually not for beginners.

“The Triple 7 is one of the airplanes that people usually don’t touch until they’re around their forties or fifties or they’ve been at the airlines for a very long time,” Sinegal told WXXV25.

The young pilot added that a scholarship opportunity allowed him to get in the cockpit, a dream whose sees were planted long ago.

“The biggest reason for me is that I’ve always wanted to fly this airplane. I was able to get in it for my first time in 2004 going to Anchorage, Alaska, which is my favorite place in the world.”

Back in 2018, the Mississippi resident was given the chance to travel the world through the Delta State University aviation program as an ambassador for Republic Airlines. His stops included such exotic destinations as Dubai, Sydney, and Tokyo.

“They have blessed me,” Sinegal said in a university press release from 2018. “We have the best teachers and instructors. Dr. Speakes, Sam Washington, Chip Cooper, Rogel Campbell, and Brett Oleis definitely need more credit for their hard work on campus.”

Sinegal is currently working in flight instruction at the New Height’s Aviation in Batesville, Mississippi.