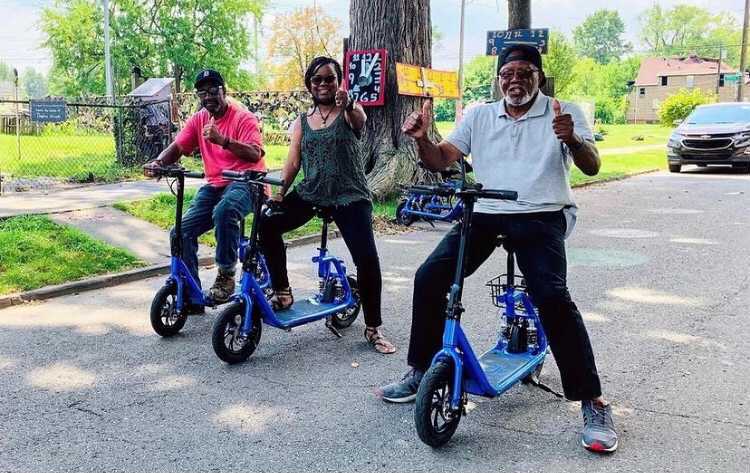 This up-and-coming Black-owned e-scooter company is giving the big dogs a run for their money.

Detroit-based Boaz Bikes is one of six companies with scooters lining the Motor city’s streets, but the startup’s backstory and scooter design is unlike any other.

CEO Emil Nnani, 32, founded the company after witnessing a serious e-scooter crash in 2018. The crash, which happened in Dallas, involved a young person who left the scene in an ambulance. Nnani decided to make a scooter with safety in mind.

“I was thinking, man, how unsafe these scooters were and for this person, life was going to be different,” Nnani told the Detroit Free Press. “I got to researching and I saw articles everywhere about accidents on Bird and Lime scooters. I was like, OK, I can create something safer.”

So, he did. And he gave the scooter a cool four-letter name.

“You’ve got the Ubers, the Lyfts, the Birds and Limes—everybody has a four-letter word,” he said. “And me being a believer, Boaz is a biblical character. He was married to a lady named Ruth, and he was strong and he was wealthy. And so I said, ‘I’m running with Boaz.’ ”

Nnadi, a former Blood gang member who spent time in juvenile jail for robbery, later found Christ and joined the Christian hip-hop scene as rapper “E-Fetti.” He also had a Christian apparel business that he eventually sold.

Boaz currently has 400 scooters on the market, all of which are available for riding in Detroit. The company plans to expand to Los Angeles this fall and other cities next year, if and when more investments are obtained.

The company had to pull out of several cities, including Plano, Texas and Atlanta in 2020 because e-scooter businesses were considered nonessential in those places.

“So we halted everything and pulled out of all cities,” Nnani said. “For a few months we’re just sitting there, and I’m thinking what to do next and what’s the pivot. And that’s when I decided to double-down on Detroit.”

In Detroit, where scooter companies are considered essential, about 80 percent of riders who ride Boaz scooters ride for fun and 15 percent for transportation to work, according to surveys. The scooters cost $1 to start, then 33 cents per minute.

The entrepreneur said he applied to Shark Tank twice. Though his 2020 pitch was accepted, he was ultimately denied because the show has restrictions regarding criminal convictions, he said. The television show didn’t respond to a comment request from the Free Press.

Unlike his competitors, who raised hundreds of millions in venture capital, Nnadi struggled just to get in front of investors due to lack of connections. He once posed as an UberEats delivery man in an attempt to get to a venture capitalist to pitch Boaz Bikes but was unable to complete the mission.

Still, Nnadi didn’t give up. He eventually raised over one million through crowdfunding. Boaz Bikes is now a competitor to major scooter companies Bird and Spin in the Motor City, he said.