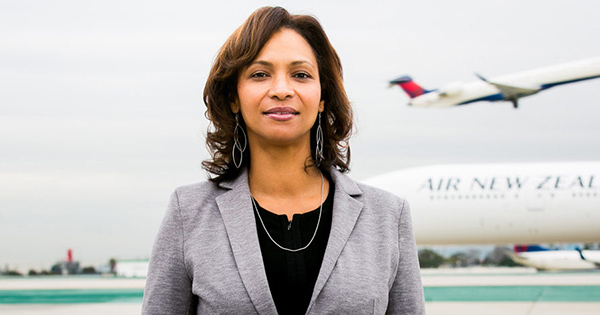 Los Angeles World Airport, which owns and operates LAX and Van Nuys Airports, is run by a black woman. Deborah Flint is CEO of two of the largest and busiest airports in the United States. Flint, who has been the CEO of LAWA since 2015, is in charge of enhancing the passenger experience of fliers traveling in and out of Los Angeles.

“Deborah is an extraordinary leader whose ingenuity, patience, and uncommon commitment have helped bring LAX to the doorstep of transformational change,” Mayor Garcetti said in a statement. “She has put in motion all the key pieces of LAX’s modernization, from the contracts and groundbreakings for the Automated People Mover train and other state-of-the-art facilities to the team that will build the airport of the future to welcome the world in 2028.”

LAX is poised for a large expansion that could add up to two new terminals and nearly two dozen new gates to help handle the influx of travelers headed to the city for the 2028 Olympic Games. The expansion plans include reconfiguring existing airplane runways, including on the northern end of the airport, where earlier plans to retool runway facilities produced an outcry from neighboring communities concerned about noise, pollution, and other negative impacts.

Early next year, Flint will leave her job and become president and CEO of the Greater Toronto Airports Authority that operates Toronto Pearson Airport.

“It is bittersweet to be leaving LAWA, but, as a Canadian-born airport executive, I am looking forward to this homecoming and to leading Toronto Pearson, a rising and notable star on the international airport stage,” Flint said in a statement.

“It has been my honor to sign the contracts, put shovels in the ground, and implement robust oversight programs for some of the most ambitious projects at any airport in the world and in Los Angeles history. I look forward to watching the amazing LAWA team bring these projects to fruition and truly achieve our vision of gold standard airports, delivered.”