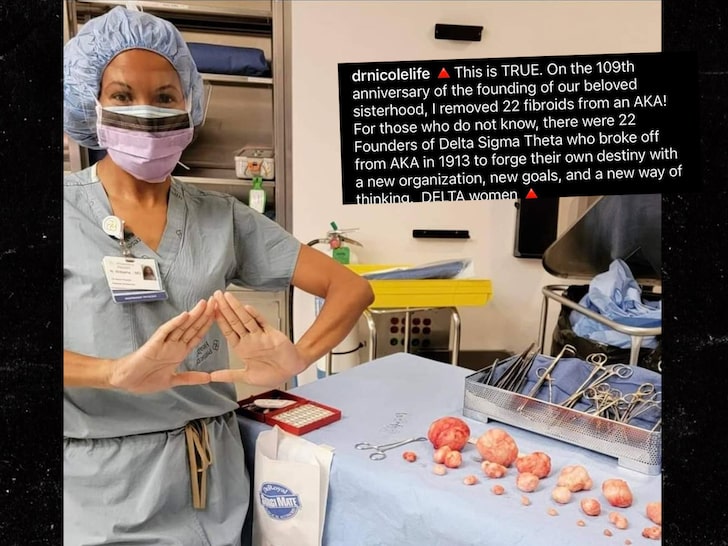 In a since-deleted photo, captured by TMZ, Dr. Nicole E. Williams was seen posing after a January 13 procedure with 22 fibroids of various sizes, all while repping her sorority with a hand sign. In poor taste she also boasted in her caption about extracting the fibroids from a patient who was a member of the Alpha Kappa Alpha sorority.

Williams wrote in the caption: “This is TRUE. On the 109th anniversary of our beloved sisterhood, I removed 22 fibroids from an AKA! For those who do not know there were 22 Founders of Delta Sigma Theta who broke off from AKA in 1913 to forge their own destiny with a new organization, new goals and, a new way of thinking. Delta Women.”

The backlash against Williams’ actions followed immediately. Instagram users and critics called her out for exposing another woman in that way, especially as a medical professional. In today’s climate, Black women still struggle finding Black doctors, particularly with someone whom they can feel safe, in the healthcare system.

Imagine going to a doctor that looks like you for comfort and peace of mind…just to end up having your fibroids displayed for the world to see. This is corny beyond measure. So much for a “safe space” smh

Soon thereafter, Williams uploaded an apology to her Instagram, calling the picture a “terrible decision.”

“A terrible decision was made,” she wrote in the caption of a blacked out Instagram photo. “I unequivocally and prayerfully apologize for any hurt I may have caused. It is my hope one day to live up to the high ideals that I have so damaged. The only thing I can do is to keep working hard in the future.”

Unfortunately, more users were displeased with her apology, saying it lacked accountability. Meanwhile, others came to her rescue, noting that her actions were a mistake and that she should not be torn down as a pillar of the healthcare community.