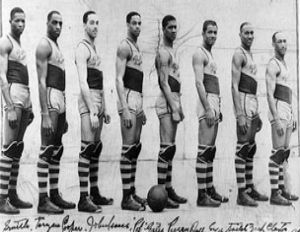 Back in the 1920’s when people of “colorâ€ couldn’t play with “whitesâ€, the ‘Harlem Rens’ were formed and became the first all-black professional basketball team to pave the way and change history. When the NBA was created, it was segregated, and these players helped to permanently change that. Also referred to as the ‘New York Rens’ and the ‘Renaissance Big Five’, the team was established on Feb. 13, 1923, when their manager and owner Robert Douglas struck an agreement with Harlem real estate developer William Roach, who owned the New Renaissance Ballroom and Casino.

The Ballroom became Rens’ home court, Â located on 138th Street and Seventh Avenue. The Rens were a dominating force to be reckoned with throughout the 1920’s and 30’s. Their first game was played in November, where they faced an all-white team, drawing a massive crowd and attention. Two years later on Dec. 20, 1925, the Rens beat the original Boston Celtics and claimed the title of world champs. During the 1932-33 season, they held an astonishing record of 120-8, as they won 88 consecutive games, a record still unbeaten today.

The roster included some of the best known basketball stars such as Bill Yancey, Clarence Jenkins, Pappy Ricks, Eyre Saitch, “Weeâ€ Willie Smith, and Charles “Tarzanâ€ Cooper. Regarding the Rens history, they had an extremely impressive record of wins to losses, at 2588-539. In addition, the team also became the first top-level team to sign a four-year African American college star, David “Big Daveâ€ DeJernett, in 1936.

[Related: This Day In History: The ‘Home Run King’ is Born]