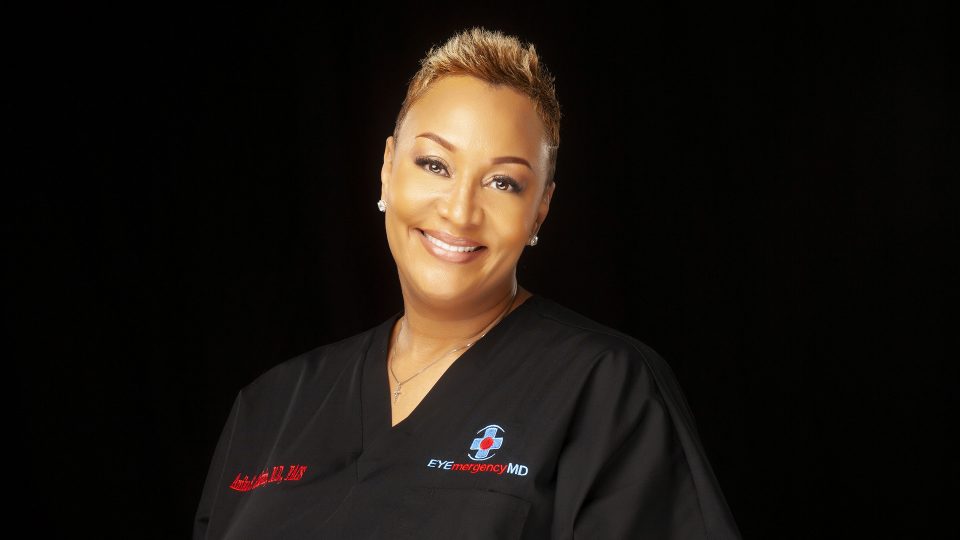 Dr. Anika Goodwin, a board-certified ophthalmologist with 15 years and 10,000 eye surgeries under her belt,  has married her dual passions of looking good and seeing well to create OpulenceMD Beauty, an eye specific beauty brand that specializes in magnetic lashes.

Goodwin knew from an early age that she wanted to be in medicine, but never imagined she’d become an eye doctor.

“I’m a bit of a creative,” she says, “and I honestly believe that was one of the things that led me to love ophthalmology. I enjoy beautifying. My specialty of ophthalmology is called oculoplastic reconstructive surgery and so I focus on making the eyes the eyelids, and the facial structures that support the eyes, all function as well as they can while having as good a form and appearance as they can.”

“We as black women, since the beginning of time, have been figuring it out and getting it done. This is what we do,” she continues. “We take a hardship, we figure out a solution, and we then make that happen. Entrepreneurship is basically in our DNA.”

For Goodwin, her entrepreneurial idea started with her own love of lashes.

“I’m one of those people who used to go to work all the time in high heels, dressed up walking through the hospital. But I have never had the luxury of time between being a physician, a spouse, a mommy. I never had an hour to put my face on in the morning. So one of the things that I discovered early on was how much of a difference a set of lashes made in your look,” she says. “I could put on lashes, put on some lip gloss and look totally pulled together.”

Goodwin experimented with all types of lashes, eventually becoming a individual lash extensions user for years. But for a busy professional, hour-long touch-up appointments every two to three weeks became too much to fit into her schedule.

“During that time you’re lying on a table; your eyes are closed. I couldn’t return phone calls, I couldn’t answer emails, I couldn’t do anything. So I made the decision I was going to have to give these up,” she says. “But I realized how much of a difference they made, not just in my look, but in my confidence. I no longer felt like I looked pulled together. Even with mascara I couldn’t achieve achieve the same look.”

She also realized how much damage she’d done to her natural lashes.

So Goodwin began to look for other options. That’s when she turned to magnetic lashes, and—as with everything else in her life—started doing her research to learn all she could about them.

“I discovered there were things that could be better about them, that could make them easier to wear, more comfortable to wear,” she says. “There were things that would make them not be as heavy on the eyelids, which I felt distorted my vision a bit. I set out to basically solve those issues for myself and in doing so decided that other women like me, busy professional women, would benefit from the same thing. So I decided to do it on a much larger scale.”

Her clinical experience helped her create a product that keeps vision and eye safety at its center.

“Our lashes have a purpose. The main function of our eyelashes is to protect our eyes. The base of your eyelashes have oil glands, and the purpose of that is to protect your tears from evaporation. If you lack that, then you’re more prone to dry eye. So the lashes are much more than just a beautiful frame for your eyes. You need them to be healthy,” she says.

It’s why she chose mink as the material for her lashes, because it’s the most lightweight. It’s also why all of her lashes are magnetic, avoiding the need for adhesives that many times contain formaldehyde and also allowing for women to easily remove the lashes and clean both the product and their eyes on a daily basis.

“With clusters, or individual lashes, or even strip lashes that you glue on, women don’t want to do it every day or they don’t want to go in for their touch-up more often than they have to. So what do you do to preserve those things? You avoid aggressively washing that area,” she says. “Well in doing that, you’re not doing that daily lid hygiene routine that is so necessary for healthy eyelids, and not just healthy eyelids and eyelashes but for healthy vision.”

The lashes are also offered in petite sizes with smaller bands because “not all eyelids are created equal” and “eyelashes are not one size fits all.” There are special collections for beauty pageants, cheer and dance teams, and weddings. And all of the lashes are cruelty free and latex free, with some vegan options.

“As we look more toward clean beauty,” Goodwin says, “and we start to pay more attention to the products, the ingredients that we use on and in our bodies, you should not forget about that same principle as you’re looking for something to complement your eyes.”