Find Out the Reason Why Your Boss is a Bully 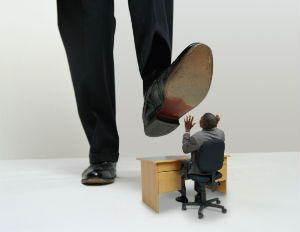 Some bosses are just bullies. In many cases, from the outside looking in, there is no method to the bullying madness that is belittling, pressuring, accusatory, deceitful, neglectful, and fails to give credit where it is due.Â The madness of bully bosses can result in job dissatisfaction, low work performance, lack of timeliness and productivity, psychological distress, exhaustion, hostility, and high turnover.

Why do bosses bully?

According to a Harvard Business Review, the bosses themselves may feel stressed, are under pressure from their own bosses, or are experiencing conflict with other coworkers that spills over into their relationships with their direct reports. Sometimes it has nothing to do with work–some bully bosses have a history of family abuse, while others just have little ability to manage their emotions.

It has been learned that “weakerâ€ employees–those that may suffer from low self-esteem, are poor performers, are challenging to deal with, or are negative or hostile–are often more likely to be bullied.

On the flip-side, star performers are sometimes bullied too. “This is because high performers represent a threat to supervisors who place a high value on their dominant position in the hierarchy,â€ explains Wake Forest University School of Business professor, Sherry Moss. “To such a boss, an up-and-coming subordinate who performs beyond expectations might replace them, supersede them, or garner some of the resources normally reserved for them, such as status, attention from higher-ups, or advancement opportunities.â€

To understand why this occurs, Moss shares the Social Dominance Theory, which suggests that some people have a greater tendency for “social dominance orientationâ€ (SDO) than others. People with high SDOÂ are more likely to haveÂ a competitive view of the world, whereas individuals with low SDO attach more importance to cooperation, egalitarianism, and humanitarianism.

What are you to do if you’re being bullied?

Moss suggests that bullied high-performers respond to those with high SDO by appealing to the supervisor’s superior hierarchical status to signal their respect for rank. “This might be done by ‘sharing the spotlight’ with the boss, acknowledging both publicly and privately the instrumental role their boss played in their accomplishments,â€ she explains.

On the contrary, low performance is still no excuse for bullying, but increasing your performance could potentially decrease the abuse.