'This One Felt Good': Dwayne Johnson Surprised His Mother With A New Cadillac For Christmas 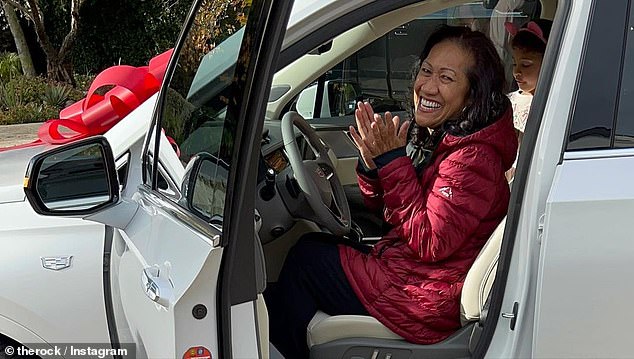 The 2021 holidays have inspired many families to take their Christmas cheer to social media, including former wrestling star Dwayne’ The Rock’ Johnson.

In a heartwarming Instagram video, Johnson unveiled an extravagant Christmas surprise for his mother, Ata, with the help of his daughters. A brand new white Cadillac CT5.

The Fast And Furious actor’s daughters Jasmine, 6, and Tiana, 3, were at the surprise reveal, leaving his mother crying happy tears. The video starts with Johnson covering his mother’s eyes as his daughters start the countdown and chant harmoniously, “Merry Christmas!”

When he uncovers her eyes, Ata stood in awe, looking at her brand new Cadillac, adorned with a big red bow. Smiling from ear to ear, Johnson stepped out of the way with his daughters so that his mother could get a better look. Ata embraced her son with gratitude as Elvis Presley’s Can’t Help Falling In Love is heard playing in the background.

While sharing the video, Johnson wrote in the caption, “This one felt good. Surprised my mom with a new car for Christmas today.” “She was shocked. She got a few good ugly cries in. Then once her grandbabies joined her inside the car. She was overcome with pure joy,” Johnson said.

Johnson also shared several photos of the surprise with his Instagram followers along with the video. They included images of Ata behind the wheel and her granddaughters in the car with her. The last adorable picture showed the family dog, Hobbs, waiting expectantly for a ride. The post amassed over 5 million likes and it is still climbing.

“I’m so grateful I can do this kinda stuff for my mom, who’s had one helluva life. I don’t take any of it for granted. Neither does she,” Johnson added in the caption.

He concluded, “Merry Christmas ma, Enjoy your new ride!!! And your Elvis records. We love you. You deserve a lot more.”

This special Christmas surprise won’t be the last accomplishment for the superstar. Fans can expect to see Johnson on the big screen in Warner Bros.’ new DC Comics adventure Black Adam, hitting theaters July 29, 2022, according to RadioTimes.com.