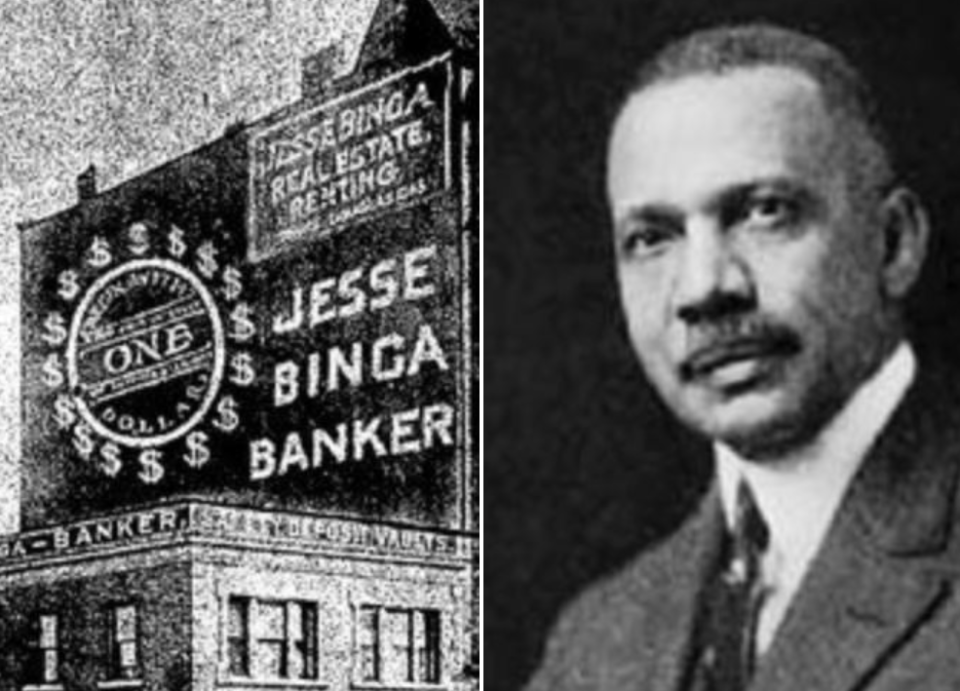 Real estate investor Jesse Binga became one of the wealthiest Black men in Chicago in the early 1900s. The Detroit native arrived in Chicago with $10 in his pockets. A few years later, he created a successful real estate empire and the first black-owned bank in Chicago.

The University of Chicago Press Journals shared Binga’s success secrets that he published. In his original work titled Certain Sayings of Jesse Binga, the prominent investor shared business and money tips that are still relevant today.

“Learn a business and then mind it. Save, Save, Save, and when you’ve got it, then Give, Give, Give,” says Binga. “Get a competency. Then the world –white or colored–will concede that you are competent.”

Jesse Binga was born on April 10, 1865, in Detroit, Michigan. Growing up, Binga would help his mom collect rent and perform property repairs. He also worked with his father, leaving the traditional high school journey to learn the barber business. In 1885, he started his travels around the country as a barber and entrepreneur. He hit the “jackpot” when he made a land investment on a former Indian reservation in Utah. But it wasn’t until he moved to Chicago that he was able to understand the inner workings of money and how to transform an entire community through real estate investing.

Jesse Binga played an instrumental role in the development of the South Side of Chicago in the early 1900s. He entered the city’s real estate business in the late 1800s and opened his first office in a former apartment at 3331 South State Street. The ambitious investor started off buying dilapidated properties and renovating them in depressed communities on the South Side of Chicago. He ignored racial restrictions and made profitable investments — even securing a lease on an all-white apartment building at 3637 South State Street for his real estate business headquarters. There was a need for housing to accommodate the influx of African-Americans coming to the city and Binga was able to fulfill that need through “blockbusting”.

“My greatest asset in business — I wouldn’t say it was altogether my integrity,” Binga told the Chicago Tribune. “It was partially the disposition of the average white man to underestimate my knowledge of real estate values. They wouldn’t believe that a colored man could take almost any old building and whip it into shape.”

The Beginning of Binga Bank

In 1908, Binga’s success in real estate gave him the foundation to open a private bank. Again, he was filling an unmet need: banking services for African-Americans. In 1921, Binga was granted a state charter and opened The Binga State Bank in 1921.

“Most people don’t realize it, but practically all our business institutions and our substantial investments are located on or near 35th street…That new investments and new enterprises are being opened by our people in this neighborhood mean that 35th Street will always be Colored Chicago’s most important commercial center,” Binga shared during an interview with the Chicago Defender in 1928.

By creating the first black-owned bank in Chicago, he aided in the development of many Black-owned businesses. He also provided employment opportunities for Chicago’s growing class of Black leaders. The country’s second Black Certified Public Accountant (CPA), Arthur J. Wilson, served as the bank’s vice president and cashier. Also, the first Black woman to become a CPA, Mary T. Washington Wylie, worked at Binga Bank early in her career before started her accounting firm.