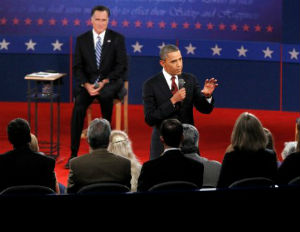 After a dismal performance at the first presidential debate, President Obama appeared more confident and aggressive as he squared off with Mitt Romney for the second time. The town hall format of the debate brought out questions for the candidates on topics such as immigration, pay equality for women, and the attack in Benghazi, Libya.

When Romney claimed the president failed to call the incident in Libya an “act of terrorâ€ in his Rose Garden address the following day, the governor was fact-checked on the spot by moderator Candy Crowley. However, Crowley also told Romney he was correct in that it took the White House two weeks to say the attack was premeditated and not a part of a protest over an anti-Islam film.

Another memorable moment–and one that inspired many a meme–came in Romney’s response to the pay equality question, in which he said that as governor he had “binders full of womenâ€ to consider for jobs on his cabinet. Unlike the first debate, a clear winner has not been declared, but many commentators and snap polls felt Obama won this one. The president and Romney will have their final debate on Monday, Oct. 22.

Earlier this week, it was reported that the Romney campaign raised $170 million last month, making September its most successful fundraising month thus far. However, that amount falls a little short of $181 million the Obama campaign and related Democratic committees raised during the same month.

Some significant comments arose this week as Romney’s family worked the media circuit. Tagg Romney, Mitt Romney’s oldest son, told a Wisconsin radio host that he wanted to “take a swingâ€ at the president during the recent debate, and on Thursday, Ann Romney told the women of The View that Mitt is done with politics if he isn’t elected president this November. The governor was supposed to appear on the show with his wife, but pulled out due to scheduling conflicts. Later that night, Obama appeared on The Daily Show with Jon Stewart, where the president spoke on the attack in Libya.

A federal appeals court in New York struck down the Defense of Marriage Act (DOMA), a law that defines marriage as a union between a man and a woman. The 2nd U.S. Court of Appeals upheld the ruling of a lower court and found DOMA to be unconstitutional. The case could go all the way to the Supreme Court.

The poll numbers can’t seem to agree this week: While a Gallup poll released Thursday suggests that Romney has a seven-point lead on Obama, other national polls are showing the candidates to be tied. A poll by the Pew Research Center found that Romney has gained on Obama on foreign policy issues, but the president still has a narrow lead. Interestingly enough, the next debate will be centered around–you guessed it–foreign policy.