This Week in Politics: Obama Wins Debate, Endorsed by Powell 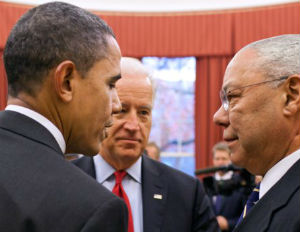 The week kicked off with the third and final presidential debate, which was supposed to focus on foreign policy. While at times both President Obama and Mitt Romney steered the conversation toward domestic issues, the discussion managed to touch on topics such as the country’s military (inspiring the much-quoted “horses and bayonetsâ€ line from Obama); the timeline for withdrawing from Afghanistan; Iran’s nuclear program; the conflict in Syria; and the U.S.’s relationship with China.

A USA Today/Gallup poll found that Obama was the clear winner of the third debate; however, according to the survey, Romney was the narrow winner of the overall debate season.

When a Tuesday night debate between U.S. Senate candidates in Indiana hit the topic of abortion, the Republican contender,Â Richard Mourdock, stated, “I think even when life begins in that horrible situation of rape, that it is something that God intended to happen.â€ Mourdock had previously been endorsed by Romney, whose campaign quickly distanced themselves from Mourdock’s views on abortion but did not withdraw their support. During his Wednesday visit to The Tonight Show with Jay Leno, Obama commented on Mourdock’s remarks and those of Todd Akin: “Rape is rape. It is a crime. And so these various distinctions about rape don’t make too much sense to me–don’t make any sense to me.”

Secretaries of State–both current and former–were in the spotlight this week. While Secretary of State Hillary Clinton has previously said that she would step down from her position at the end of this term, she hinted this week that she might stay a little longer. In an interview with the Wall Street Journal, Clinton said that it was “unlikelyâ€ that she would stick around longer, but did not completely eliminate the possibility.

“I voted for him in 2008 and I plan to stick with him in 2012, and I’ll be voting for he and for Vice President Joe Biden next month,â€ Powell said on CBS This Morning, citing the improvements Obama was able to make on the problems that the president inherited. John Sununu, current co-chair of Romney’s presidential campaign, suggested that Powell’s choice was driven by race rather than the issues. Sununu later issued a statement that seemed to retreat from his previous comments.

The presidential candidates are inÂ the final stretch of the race, and appear to be neck-and-neck in the polls. The debates may be over, but the campaigns will surely be in full swing until Nov. 6.