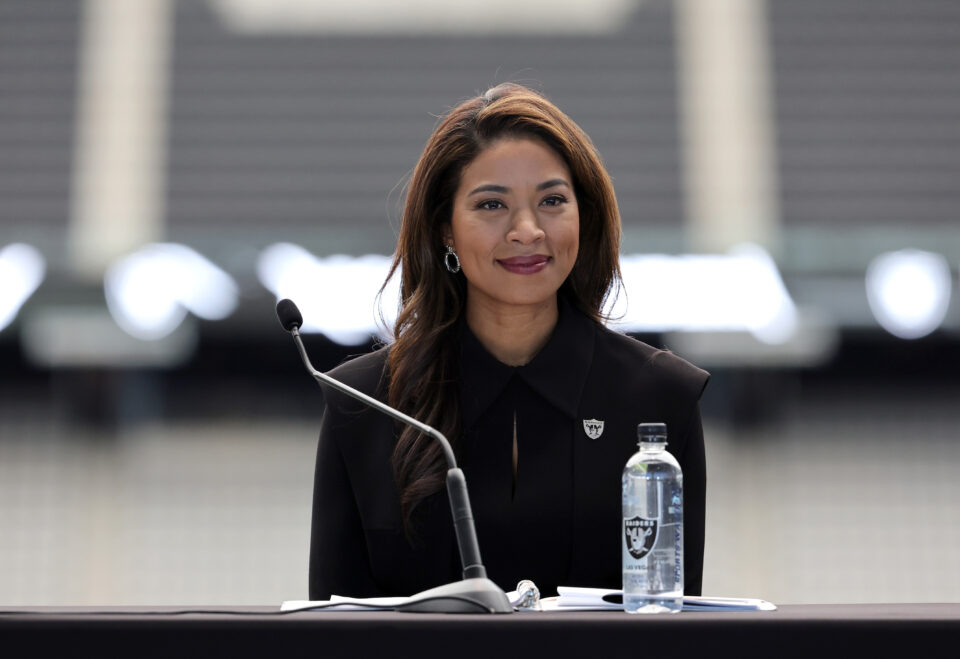 LAS VEGAS, NEVADA - JULY 07: Former Nevada Gaming Control Board Chair and former Commissioner of the Nevada Gaming Commission Sandra Douglass Morgan attends a news conference introducing her as the new President of the Las Vegas Raiders at Allegiant Stadium on July 07, 2022 in Las Vegas, Nevada. Morgan is the first Black woman to be named a team president in NFL history. (Photo by Ethan Miller/Getty Images)

While there seems to be a lack of diversity in the NFL coaching and ownership ranks, there has been an increase in NFL front offices.

Andscape reports the number of NFL team presidents has increased from one to four this year including the league’s first Black female team President in Sandra Douglass Morgan of the Las Vegas Raiders. In addition to Morgan, Jason Wright of the Washington Commanders and Sashi Brown of the Baltimore Ravens make up the other team presidents.

Diversity is increasing in other areas of NFL front offices as well. At the end of the 2018-’19 season, Chris Grier of the Miami Dolphins was the only Black general manager in the league. Today there are seven Black NFL general managers, six of which have been hired since 2020.

That group includes Cleveland Browns GM Andrew Berry, Terry Fontenot of the Atlanta Falcons, Brad Holmes of the Detroit Lions and Martin Mayhew of the Commanders, Chicago Bears GM Ryan Poles and Minnesota Vikings GM Kwesi Adofo-Mensah. Additionally, while Dallas Cowboys Vice President of Player Personel Will McClay is in his 20th season with the team and oversees their draft.

Media Mogul Byron Allen, who earlier this season tried to buy the Denver Broncos earlier this year, is now in the running to buy the Commanders and become the league’s first Black owner.

NFL Commissioner Roger Goodell has also added to the diversity of the league’s NYC headquarters. According to Andscape, nine of the NFL’s 17 highest ranking officials are Black and eight of the nine have vice-president or president in their title.

NFL senior vice president and Chief Diversity and Inclusion Officer Jonathan Beane told Andscape that he isn’t surprised by the increase in diversity across the NFL.

“Each team has three CEOs,” Beane said. “You have the GM, the head coach and the team president. The president’s role is a critical role for an organization. And the thing is, when you look at each one of [the new team presidents] … they have exceptional backgrounds and a long history of great leadership.

“These are positions where you have people that have been in the roles for 10, 15, sometimes 20 years. That’s one piece that has not really being emphasized as much as it should [about improvements in hiring], because you’re talking about someone who [could] be the face of their organization, or one of the faces, for a long time.”